Jerry Saltz is an UNDEAD ZOMBIE!!

These are just very short impressions, but I'm not going to feel too bad about it after reading Jerry Saltz repeating himself for the hundredth time... the weird Marlene Dumas side-swipe again, counting ads to content in Artforum again, the 30 month/year career thing again, "the market" again, ad nauseam.

Can I just say that Jerry is very lazy? Seriously, that is what I'm beginning to suspect. "Drinking the Kool-Aid", PT Barnum, number of galleries in Chelsea... check, check, and check. It is all there Jerry, cross them off your list. This is almost the EXACT SAME article you wrote at the beginning of the year. The same quote from Tobias Meyer, the same quote from Amy Cappellazzo.

Even the last lines of the two articles -

Last line of 1/18/07 Village Voice article - "The market is art minus otherness. The rest is gossip."

Last line of 10/2007 New York Magazine article - "The market is art minus otherness. “The rest,” as artist Anat Elberg recently said, 'is gossip'."

That's sad. Are you like, a zombie? If so, please eat some brains. Did you not see my moratorium?!?!

UPDATE: Jerry Saltz wrote a response to this post. 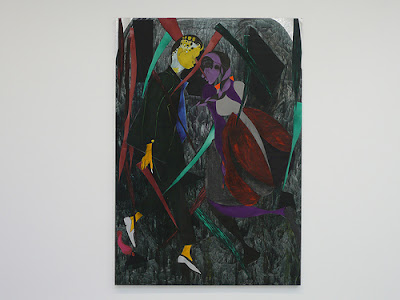 Chris Ofili, Christmas Eve (2007), at David Zwirner - this piece was my favorite of the paintings, and it's the only painting that is mixed media, the others were all thinly brushed paint on canvas, some with charcoal.

This canvas was first covered with a layer of aluminum foil, which was then painted with that dark arch or doorway. The dancing figures are made from scraps of painted and collaged canvas. Most of the other paintings were very Bob Thompson... this one is more William Henry Johnson. 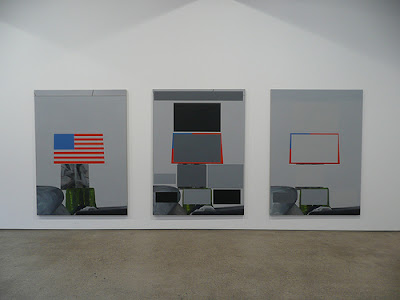 Eberhard Havekost, at Anton Kern - I always go into Anton Kern, because it is never bad, even if I am not always so sure what I think about it. I don't remember anything else from this show, have no other photos or notes, but whatever... it is better than what you will get reading New York Magazine.

Huma Bhaba, at ATM - four (?) photographs, not editioned. She's made cracked crumbling feet of clay, over styrofoam and chicken wire, then photographed them on the beach. Louise Borgeois' Femme Maison works one thousand years into the future.

The Gentle Wind Project, at Feature - Paul LaFolley + Emery Blagdon.... without the magic, passion, or intensity .

Natalie Frank, at Mitchell-Innes & Nash - the smaller portraits, I think there were two called Portrait and two called Robert, were good. All of the eyes.. something strange is happening. The one portrait of the woman wearing a silky pink shirt (or dress?), big chunky earring, in front of the striped and patterned wallpaper... so good and weird.

Eva Struble, at Lombard-Fried - I went to this because I like Lombard-Fried, and because Christina Viveros-Faune had said to "compare Viveros-Faune considers Struble, unlike Frank, "a painter of substance", whose "figurative chops meet equally vigorous subject matter".... but.... NO! It was not true at all! (some of his criticisms of Frank had validity).

update: actually, i'm remembering that the struble paint style reminded me a lot of tala madani, whose show i had seen at the same gallery. i liked the madani show more.

Jules de B, at Zach Feuer - Snooze. I have never understood the interest in this artist.

Susan Graham, at Scroeder-Romero - captivated by these stringy ceramic objects, things she would imagine needing in the event of a disaster... a swiss army knife, a can of tuna fish and a can opener, a sewing kit. The pieces really move, like the can opener, and the knife... more later

Is it true that Zach had Schroeder-Romer booted from NADA because he didn't like the William Powhida caricature/parody of him? That's what I heard (not from anybody associated with any of it).

Deborah Kass, at Paul Kasmin - liked. These had me thinking about the rewards of planning out your painting before you begin...

Xylor Jane and Wendy White, best in a group show at Monya Rowe.

Patrick Hill, at Bortolami - this was an interesting show... with paintings, a mobile, and sculptures on pedestals that are slowly falling over and shattering. I took some good cell-phone photos and would like to show them, but can't because I am three months behind on my bill and Verizon won't let me send anything anymore (the other photos posted from this trip were taken on a different day, with someone else's borrowed camera). I think that I will eventually post those photos.

Jack Whitten, at Alexander Gray - got into the two big gray paintings in the front room, and the toner drawings. The two big paintings are made from some maybe scraping and dragging process, lots of grooves. They looked like printer's mistakes, the way things didn't line up but seemed like they were supposed to, I had to get up close to confirm that it was paint, and not some mechanial printing process. Very much had me thinking of the excellent Wade Guyton show at Friedrich Petzel a year or so ago....

All-overness, general blahness, suffering in comparison at the Met -

Ingrid Calame, at James Cohan - look like Matt Ritchie, same all-overness and general blahness, but even more blah. What is she doing? These have never been very interesting... and they just keep coming. The best one for me was the Matisse-y From #258. Later at the Met I saw Stuart Davis' Arboretum by Flashbulb (1942) and thought about how it had some of the same qualities but is so much better.

Emilio Perez, at Galerie Lelong - on-line and small like comic books, in person and larger more like stylized graffiti... also with a Matt Ritchie spark-less something. I thought I would like this show more than I did, but I much more enjoyed getting lost in the faded green swoops and swirls of that HUGE mural at the Met, Pure Land of Bhaishajyaguru, The Buddha of Medicine.

more thoughts and links interspersed later...
Posted by Martin at 5:00 AM

oh, martin. but don't you see? the The VOICE paid him to write the first one, and the other was paid for by NY Magazine. totally different!
you're priceless.

That is very funny Martin. Very, very funny.
I never understood the Saltz thing. The first few reviews I ever read of his were full of the same line about his time at the Art Institute in Chicago when he was a boy. He repeated that at least three times in separate reviews.

i hope he gets yelled at and told to review some art shows.

You are hilarious. And right.

what do those two last lines even mean? anything? does that make sense to anybody? please explain.

Yeah, good question. "Art minus otherness." What does that mean???? Otherness could mean many different things and I don't know how to make any of them make much sense.


Why doesn't he just find some work he likes and review it? That would be the best way to combat what he is complaining about; ignore it and write about what you like.

hi martin... thanks for seeing the monya rowe show and for the plug!

the saltz article was such old news. when i started reading it i thought maybe i'd accidentally clicked on the archives or something. i miss the old saltz, the one who championed the kids. it was annoying but at least it wasn't snoresville.

I really enjoyed reading your take on the Saltz essay. The research or use of quotes really bolstered your argument. I wrote about the Saltz piece in my blog as well and provide a link for your post. I am a big fan of your blog. Thanks.

hey eric, thanks! i've read your stuff on artcritical, plenty of times.

i've just added your blog to my list of blogs.