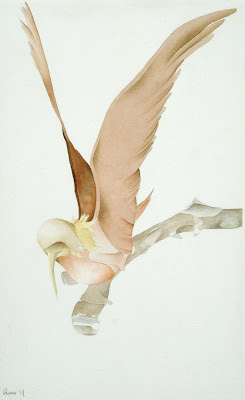 this is great!! I would love to see more from this time period..

dude that is totally seventies! Reminds me of Ruscha (seventies) and the lady who did the big Gigeresque wall sculptures of zippered voids or whatever. God my mind is shot.

I set my old shit out for the cat to pee on, as I can't put it all in a pile and call it 1000 years of loneliness and do it myself like Anselm kiefer. Fact is, its embarassing - like the diaries of Susan Sontag, only withotu the sex and not so many words except maybe a heuristic or hermeneutic in there.

Lots of folks burn their old shit - thats why its good not to sell your old work. A real bonus. Like the trash bins at art school after graduation. As an artist it can be really satisfying to throw shit away.

unless someone saves it or it is signed and comes back. SOmetimes they do that.

Where did you find this beauty?

timothy - i found it on an auction site... here is the accompanying information -

"To Whom It May Concern:

From 1970 to 1972 I attended Nasson College in Springvale, Maine during which time I met Richard Prince. He was a senior while I was a freshman so we did not know many of the same people. However, Nasson was a very small school so it was not unusual for people to know each other as acquaintances or to be at the same parties or gatherings. In my second year I moved off campus to an apartment on the first floor of a building on Main St. in Springvale, ME. While living there, I saw Richard more often as he visited the people who lived upstairs from me. I babysat for the children of this couple and would see Richard when he visited.My personal recollections of Richard, whom I remember being called Dick, was that he was a quiet man but was well known as a very good artist who did exceptionally precise and ornate pen and ink drawings, mostly black and white but also in color. He spent a great deal of time in the art department at Nasson, most often in the print shop. He was quiet, but he was known for his artwork and his personal image in that he wore overalls all the time and a wool watch cap on his head all year round. I bought this picture from him after seeing it at his friend's apartment upstairs from mine. I know that he had a sardonic sense of humor which was typified, to me, by this picture. I was struck by this picture because while I really liked the warm colors and the peaceful image of the bird on the branch, I loved the fact that the bird was wearing a crash helmet.