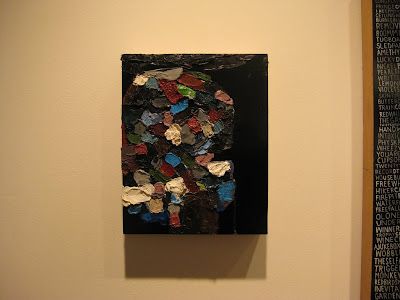 EJ Hauser, in Unbreak My Heart, at Pluto. 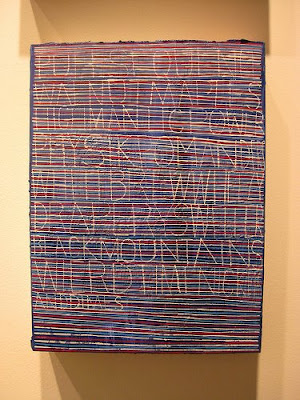 EJ Hauser is one of the painters who was included in Party at Phong's House, curated by Chris Martin. 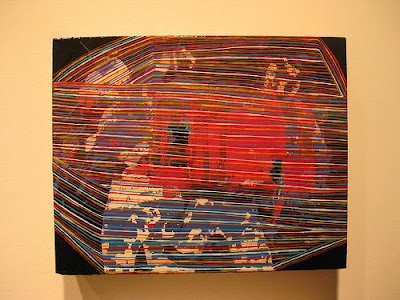 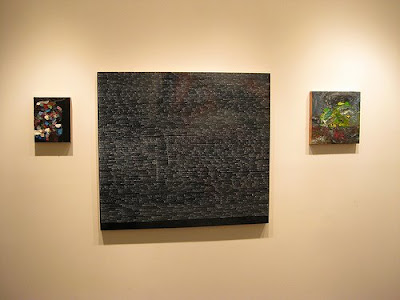 The small painting at left is the one featured at the top of this post. Brent Burket standing between two Rosanna Bruno paintings... Brent curated the show... Rosanna is included with two large paintings... hard to get a good photo of them, only side-shots.
Rosanna shows with John Davis Gallery! That's where Circus on Mars was!!!
Unbreak My Heart, at Pluto, closes January 18th. INCLUDES more good work by BETH GILFILEN, ROBERT SCHATZ, and LUKE WHITLATCH... nice space!!
Posted by Martin at 12:01 AM

Thanks for the shout out, Martin! Most awesome. It was great to see you. Also most awesome.

Pluto is hard to get to, as one of those supposed galleries in the solar system.

The space is good though, and the program seems committed to showing emerging artists and such witout defauting to community pleasing shows about the hood without critical awareness or marxist agitprop or whatever passes for engaged art these days.

Still it does seema bit tame, as I;ve probably said before about some of the work in the show, where's the blood? oh, right, it's hidden behind a veil, wrapped in a scarf, or not really all that concerned with the nattering nabobs of negativity. People don;t want lumps of coal on their wall, they want knitted angora socks with japanese anime characters for toes. THey want angelhair pasta, al dente. THey want domestic scenes of medium powered power pop, or sea and cake. Or dumbed down luke warm norwegian death metal.

(I;m speaking in generalities here, not the show which I haven;t seen and which I wont see until I have some cash for a beer at the nearby watering holes, of which there are some)

Looks like a good show though, well curated, judging from the pictures and names and card reading, if you like that sort of thing, which I know I've been a blow hard about
and I'm not about to go changing.

Brent, you are a hipster doofus - just look at yourself - though you aren;t as big a nerd as that dude that got canned from the Village Voice...I heard Roebling Hall closed - score one for the outer planets!

I have hardcore EJ love. Love.

I think I tried to swat your junk last night Martin. Sorry about that.

Count Zipular. Thanks. And LOLing at the label. I definitely agree with the second part.

And yo. In regards to the "dumbed down luke warm norwegian death metal". That's why you should be listening to the Polish and Ukranian shit.

Barnaby. I couldn't agree more. I mean about EJ. Not about swatting Martin's junk.

I saw this today. It is a good show well curated. I saw no knitted angora socks with anime toes. Though, if I could knit, I bet I could pull those off . . .

I was interested in more than half of what was in this show. That's a lot.

I definitely think Pluto should be reinstated as a proper orbiting gallery.

i want that EJ painting so fucking bad. i may have to steal it.