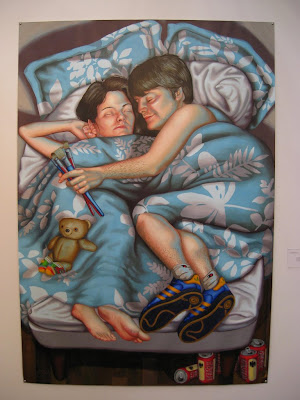 Tom Sanford, Tom and Alex in Bed, 2008, oil and acrylic on paper, at Leo Koenig - this was so unexpected, and sweet. 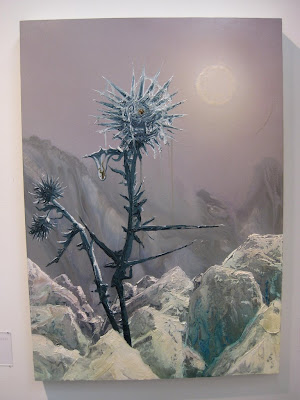 Alexis Rockman, Thistle, 2006, at Leo Koenig. He has the current show at the gallery... and the most interesting piece by far in Molecules That Matter. 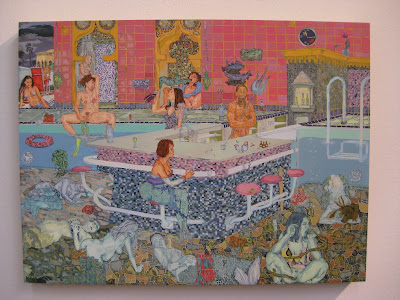 Kelli Williams, Wet Bar, 2007, at Leo Koenig - it's real small, so much stuff happening, you need to click on the picture to see it bigger... here's a detail of the snake. gee martin, i am touched

That Sanford is a great re-do of Guston. I like the smile.

The Williams could use a little more accurate perspective,I think.

yeah, you're right, seeing how it's so based in reality and all.

On a side note.. Martin.. whenever you google Inka Essenhigh .. the first pic of the three that is up at the top of the list when it says image results for Inka Essenhigh is your thumbs up pic of her..

oh,come on,a straight line is a useful item no matter what the subject-dont be disingenous-

if anything bothers me about that painting it's the water.. it took me a while to get that.

but i take it back.. it doesn't really even "bother" me.

There is no consistent perspectival moment if the composition is looked at as a whole. Within each individual segment the local space makes sense, a field that immediately surrounds each figure. The artist is using a panoramic device. The separate little worlds the figures inhabit are interlocked to form an odd montage image.

Sorry my grammar was so atrocious in my last comment. Here is a better version.

There is no consistent perspectival moment if the composition is looked at as a whole. It would destroy the logic of the composition if the artist used one vanishing point to bring coherence to the whole. The artist wants to fragment and compartmentalize space. This increases the isolation of each figure and each action. It is like a tableau. Within each individual segment the local space makes sense. A figure sits on the edge of the pool, another one sits on a bar stool, another one is resting her hand on the edge of the bar. This compositional technique emphasizes the isolation of each figure. They are self contained monads, pleasuring and obsessively gorging themselves. It is a symbolic ode to masturbation and self indulgence.

The artist is using a panoramic device. The separate little worlds the figures inhabit are interlocked to form an odd montage image.

(Sorry if I go on I will have to bill the artist. Nice painting.)

Hi Martin
I'm glad you posted my painting.
I liked the ATM gallery booth at Armory. What did you think of that one?

hey kelli. that was a striking booth, for sure, although i think i preferred the photos she showed at atm (at her last show)... they had more of a sense of wonder for me.

(we are taking about huma bhaba, for those that didn't get to the fair)

eric - thanks for all that... you have made looking at the painting even more rewarding... and gotten me thinking about ways to possibly experiment with some of those ideas in my own stuff, in abstract painting.

plus, monad is an awesome word, one that i haven't heard in a long while -

"[M]onads are windowless essences, not permitting in the entrance of anything from outside. One monad cannot influence the other. True knowledge is infinite, unfolded from within, not received from outside. The possibilities of a monad are hidden in it, as a tree is latent in a seed. Evolution is the process of the realisation of the inner potentialities of the monads. The higher stages of evolution include and transcend the lower ones. The whole life of a monad is therefore a long chain with many links of the stages of self-transcendence. The past is over-stepped in the present and the present transcended in the future."

This is what I meant when I used the term. Each figure in Kelli's painting is going through an internal process. The figures that are gorging themselves are perhaps meant to represent self destructive behavior or the compulsions/impractical rituals that plague individuals. The other figures are lost in their minds or bodies.

They writhe, stare into space. The bartender is the only figure that directly addresses the viewer and the rest of the figures do not acknowledge one another or the viewer. Figures are whole and fragmented. Some of them are asleep, one looks pregnant. They are practicing mysterious rituals.

The variety of poses suggest stages of life. There is a variety of mental states represented in this one painting. (The figures are wonderfully rendered.) They have a corpse like palor though and this again suggests death.

Also the one male figure in the painting is the bartender, the one who serves intoxicants, and he holds a trident like the Greek god Poseidon. Obviously this references pagan culture, but in the setting of a bar/contemporary swimming pool this is humorous, but also a clue as to what the artist wants to tell us about contemporary life.

The bar itself looks pixilated, like it is made from binary code on a computer monitor, and the painting does very interesting things with ideas of flatness and depth. There is no easy way to figure out the pictorial space.

One wonders why the figures placed on the upper half of the canvas are flesh colored and the figures writhing around on the floor have a corpse like green palor.

Hey Martin I would be happy to do a studio visit at some point.

I used to do them all the time when I was an undergraduate, because a lot of people asked me to. I was an English major but I used to walk through the Visual Arts building quite often.

Poseidon, and his underwater realm, is one of the subjects of this painting. The greenish figures are supposed to be underwater. The figure seated at the bar, with her bosom, shoulders, and head and neck above water give this away. Here lower half is submerged and most of her upper torso, which is flesh colored, is above the water line. So the watery depths represent the human unconscious, but interestingly, the figures above the water line are just as transfixed as the figures that are submerged in the water.

The strange entrail/snake like coils that come out of the vaginas of two of the figures are strange, ambiguous symbols. The woman who is suckling or drinking from the end of one of the umbilical cords/green ropes is either slowly becoming colored or her mid-section is evaporating. She comforts/pleasures herself by grasping a handful of her own hair. The idea that a woman's umbilical cord could be used for self nourishment is an interesting idea. The underwater flora and fauna and various sea creatures, rendered carefully and realistically is a very nice touch, as are the air bubbles floating towards the surface.

So there is the clear portrayal of two distinct realms, above and below water. The figures are lost in strange reveries. Poseidon addresses and identifies with the viewer (while sporting a small boner). But instead of ruling over the female figures he is serving them. Human ritual, human ecstasy, orgiastic pagan ceremonies, feminist recontextualization of female nudity and sexuality, human transformation. The female figures below the water have transformed into mermaids or are in the middle of doing so. After they become mermaids they fall into a coma like sleep. So the transformation from human to mythical half human/half animal creature is also a subject of this painting. What are the psychological implications of this transformation? The painting style and formal devices employed by the artist fully enhance the idea content of the painting.

Thank you for the interesting musings Eric. You write very well.

Well I hope it didn't seem like I was writing about everything but your actual painting.

I like the way the painting morphs and blends the textures of digital imagery and classic mosaics. It straddles the two really, which emphasizes your recontextualization of pagan and mythological imagery. One should also note the play on words in the title. A wet bar is a place in the home where you can mix drinks, and it usually contains a sink with running water. We all obviously know about vaginas and wetness. The painting is all about mixing realms, the real and the mythic, flatness and depth. It has great mystery and that is hard to find in contemporary work.

I was specifically referring to the way the rail of the wetbar does not follow the line of the top of the wetbar-this seems most inaccurate,and avoidable-and as far as that desisgn being a snake,it doesn't even look like a snake skin-I've no problem with things fading out,or getting crazy,but I think you must know what you are doing,before chewing off this big piece-as this work (and many of her others)stands,looks like a precocious teen-the drawing skills just aren't there.

i'm adding this because i don't want your most recent comment to get mis-attributed to eric.

eric - i feel like i need to make a new post with kelli's painting together with all of your thoughts. it's too much good stuff to be hidden in the comments of an "old" post.

or maybe you should submit it to david cohen or somewhere.

Unfortunately, this was a jpeg review for me. I did not see the work in person. I would have had a lot more to say about it if I saw it in person. The tactile qualities of the painting are missing and the sensual qualities are also diminished when viewing it in digital format.

I don't submit full-length essay reviews to artcritical of work I haven's seen in person. Martin I am used to having my work tucked away and invisible. Feel free to reuse my comments any way you please. It is your blog.

anon-I have never encountered a teen who could make a sophisticated work like "Wet Bar". I would assume you are using the word 'teen' as a put down. The lines on the bar do not throw off my experience of the painting. To each his own.

The pink surface of the building-why is it "grouted' with bright yellow- and what tile is so big?This bugs-There is true horror here,but with sloppiness,will put off some,and lose punch