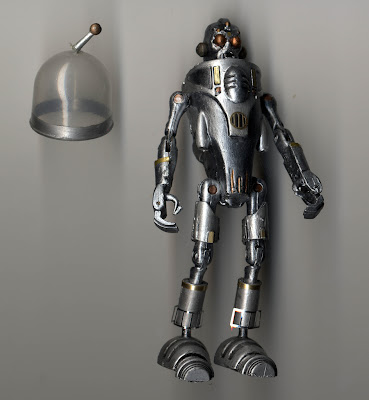 This is the little robot I bought more than a year ago from a guy named Eric Hall at Chop Suey's Bizarre Market.

It's reminiscent of a Star Wars action-figure, silver, about five inches tall, with fully articulated joints. Eric had about eight different robots, male and female, that he had cobbled together from other tiny plastic toys, putty, silver paint, and I don't know what else. Looking at the robot now it's hard to figure out what the individual pieces originally were. Eric said he was making these robots as a hobby, and when I asked for contact info he wrote "toy guy" in parenthesis after his name, so I'm not sure if he considers them art. It cost $15.00.

I haven't seen him since. Has anybody else seen Eric Hall, the toy guy?

The next Bizarre Market is October 22nd.
Posted by Martin at 4:38 AM