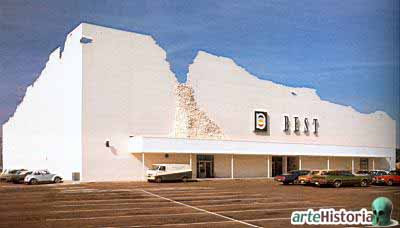 Here's an excerpt from a conversation between Elizabeth Murray and Jennifer Bartlett in the current issue of Bomb, talking about early struggles and poverty, mentioning local art collector Sidney Lewis -

"JB Do you remember all those art-for-fur-coats in the 60's?

EM That happened to us, with Sidney Lewis

JB When we got our washing machines! God bless Sidney Lewis.

EM Everybody's first TV and first washer. The thrill when that happened, being able to order anything out of that catalog, like a slide projector, a washer-dryer. It was fabulous. Sidney Lewis brought the middle class to poor artists. I remember seeing all those shiny new appliances sitting around in everybody's crummy apartments. There were no elevators; you had to carry all that stuff up these steep staircases."

Sidney Lewis was the founder of Best Products and he and his wife Frances built much of their art collection by trading with artists. They collected work from Lee Bonteceau, Alex Katz, Lucas Samaras, Andy Warhol, and so many more. They got the piece, currently hanging here at the VMFA, that Ed Ruscha tells Richard Prince is his favorite work -

"RP: Is there any painting of yours you let go that you'd like to get back?

ER: Yes, it's the one titled Noise, Pencil, Broken Pencil, Cheap Western, and it illustrates just that. It's my favorite work."

Sidney Lewis also commissioned SITE's James Wines to build some of the Best Products showrooms, like the one pictured above (Houston?) and this one in Sacramento. Are these still standing? There is very little about SITE, James Wines, or the Best buildings on the internet. I might have to look for a book.

Sidney Lewis died in 1999 but Frances Lewis is still living in their surprisingly small home on Monument Avenue. I've visited the house and it is stuffed with contemporary art and art furniture; every lamp, table, and chair is a piece of art. I think Mrs. Lewis has stopped collecting new stuff. I've also visited the warehouse where all the stuff not in the house or museum is kept, racks and racks of paintings - very dusty, many of them bent or corners poking into paintings nearby. I wonder if one of them is a 60's era Jennifer Bartlett or Elizabeth Murray? What did gallerists of the time think of the Lewis's bartering with artists? I have a feeling that they would be blacklisted today.

I want to be able to bless a collector too!!
Posted by Martin at 7:30 PM

Would you barter art for public relations? It's not as shiny as a new washer...

Can you sell ceramic figurines of my One Day in the Garden story bugs? Like a nativity set, with a log and a pipe, something for on top of the tv.

Also, if there is a dentist who will give me a smile makeover.