I saw a lot of stuff. 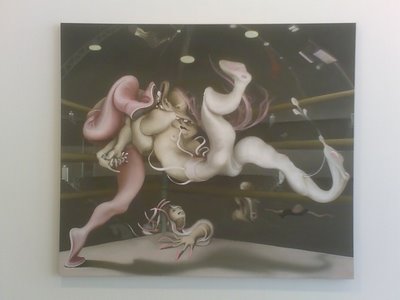 Inka Essenhigh at 303 - Some of these I liked and some not so much. I like the sense of grotesquerie and wondrousness, all of the attention to detail and the great amount of CARE. This one that was featured on PaintersNYC is full of little animals scampering away into the magic rubber plant forest; the blue painting of the woman in bed being pulled apart by white gremlins looked like a big broken blue egg.

Last June I talked about how recent Essenhigh work was making me think of some of the Ashcan School artists, including a link to this George Bellows. Now that I've seen the painting above I no longer feel like that was such a FAR OUT thing to have said (i noticed that an anonymous someone in the paintersnyc thread also made that connection).

Not so into the colors always. Too much of one color, tooo much blue, like everything is underwater. Maybe trying to make everything seem far away and slowed down? Little sculpture in the hall of the building I stayed in. Like an Essenhigh.

Tomory Dodge at CRG - Every brushstroke was the same, I couldn't get into these at all. I liked the tube sock hanging from this cactus, and some of the colors.


Tara Donovan at Pace - Too much math. Edna liked it, and of course it is a spectacular piece, but walking around Polly Apfelbaum's Cartoon Garden was more fulfilling.

Michael Raedecker at Andrea Rosen - Overall, I guess I was (a little) disappointed because I was expecting to really love the show, and didn't. This red piece though, from a foot or two away, is ravishingly beautiful. Deep reds and lush decay.

Maybe my expectations were too high, or I need to go back and spend more time with the work. I think these are paintings that I would like more and more every day. Daniel Johnston at Clementine - Went to this show ready to hate. Most of it was an awful waste of space, but some of them were strong. The person in the piece above is burning in hell and screaming "Please bring me back... I don't want to die. I don't want to be dead!".

The lack of editing was lame. The whole place was just one big ring of framed $2500 drawings. It could have, maybe, been a good show, but this just smacked attempting to cash in. Diana Al-Hadid at AIM show- This is not a great picture of Diana's piece but it was taken at the opening and hard to get a good view of. I like that line that goes from the top of the blue painting, through Diana's piece, and ends at the hairline of the man on the right.

Whoah! Diana's name is on Artnet! Alison Ward at AIM show - This video was very sexy, strange, and funny. It starts out in the woods with the music from the beginning of Led Zeppelin's Immigrant Song - just the "aaaaah.. ah, aaaaaaaah... ah" part, followed by panting. It's like someone is running through the woods, breathing hard, maybe being chased. Topless burlesque dancers appear and start dancing. They are wearing wolf masks. I can't describe it.
Posted by Martin at 2:42 AM