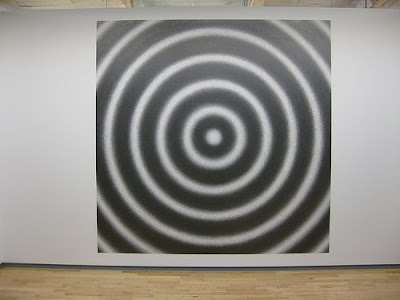 MASS MOCA admission fees have gone up but GUESS WHAT... it's worth it! In fact, I did not even go into any of the other buildings to see any of the other shows... I had already seen everything that is up... all of my time on this visit was spent in the newly opened space housing the Sol Lewitt retrospective.

Not that I paid the full price - I always bring a "student" id and pay $10 - but still! This previously un-used building is now FILLED with three floors of Sol Lewitt wall drawings and paintings... it's spectacular... guaranteed to have you wandering around for a long time. Plus there are two videos; one video is of the assistants who spent the summer making everything and the other is of an exhibition walk-through and interview with Sol Lewitt... both of which are 100% enjoyable.

If I had been one of those fortunate enough to have spent the summer helping to paint I would have worn the same outfit everday and that paint-spattered uniform would now be a treasure. Instead I was getting infected on a farm. 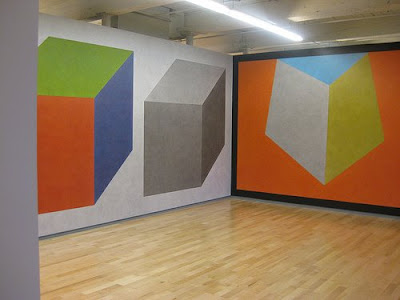 This installation is up for twenty-five years.... this is now officially a pilgrimmage spot... like Roden Crater or the Rothko Chapel. 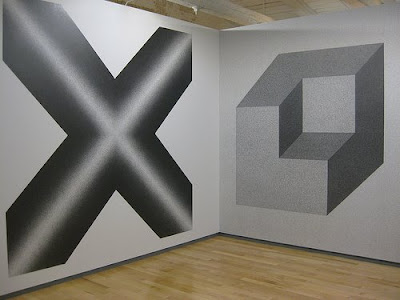 Each floor is from a different period.... first floor is early work, second floor is middle work, third floor is later work. You enter at the second floor. The pieces pictured above are on the third floor, the X is from 2007 and the cube is dated 2005... both are in graphite, the medium of his earliest drawings.

CHECK OUT THE WEBSITE because it is EXCELLENT... you can view by grid or floorplan.

It's worth noting that both the Williams and MASS MoCA texts make mention of Lewitt's forty-year career, with the earliest of the early works at MASS MoCA dated 1969, yet the artist died last year at almost eighty. So if you are thirty-five and floundering don't sweat it. LeWitt had his first solo exhibition at the Daniels Gallery, New York, in 1965... he would have been maybe thirty-six. 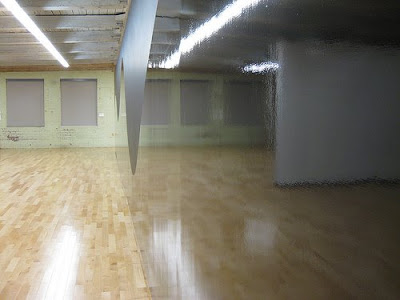 View into the infamous Building 5, from a third floor balcony off of the stairs to the Lewitt installation... they are installing the Simon Starling show, which opens December 13th. I can see the giant Jenny Holzer beanbag chairs piled up in the far corner. Want one.

Nice to be able to see this unfinished installation in progress. I recall watching Spencer Finch himself - alone with a stepladder, crumpling blue filters to install Passing Cloud - from a different balcony into another cavernous MASS MoCA gallery space, way back in April or May 2007, before that lawsuit happened. 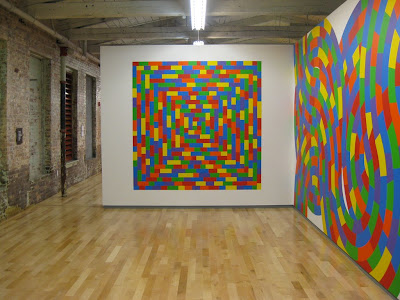 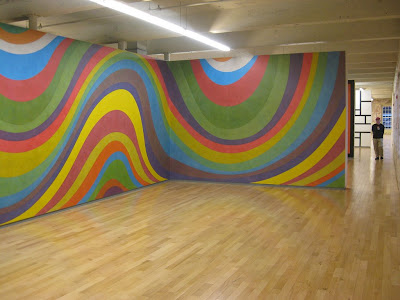 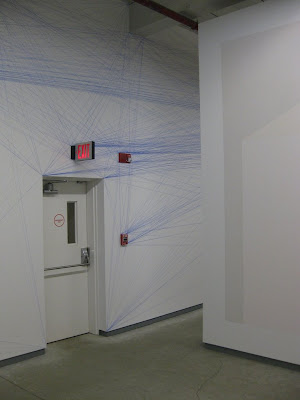 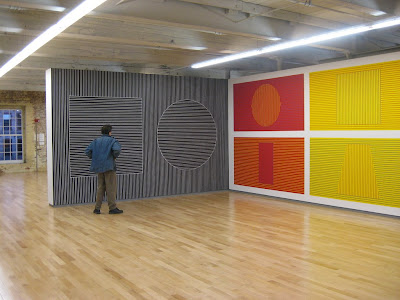 It was almost empty on Wednesday. I heard there were 1500 people at the private opening on Saturday, with 1000 attending the public opening on Sunday.

The idea becomes a machine that makes the art!!!

Make sure you stop at Williams first if you go before May 17th.
Posted by Martin at 2:00 AM

"The idea becomes a machine that makes the art"

Sorry for repeating the comment. Obviously I have nothing substantial to say right now. Could you tell us specifically why you thought the retrospective was "spectacular"? I am being serious not facetious.

What is that around the exit door? Is that part of the show?

eric - the installation is spectacular by definition: impressive or sensational, a single dramatic production of unusual length or lavishness, an elaborate display.

I was critical of his early word pieces in a NYSUN review I wrote over a year ago, but I will write a different more positive review if I revisit them in the future.

how come? i'm not sure i understand. are you kidding?

you should go to mass moca and write a review of this instead. we could put it on here if you don't have anyplace else to put it.

anytime you want to put a review up here you are welcome.

I haven't published new stuff on artcritical.com for a long time simply because I haven't written anything in a while. I still do editing work for artcritical on occasion though. It definitely seems like the perfect show to review. Thank you for the generous invitation to post reviews on your blog.

The NYSUN doesn't maintain an archive since they went under so I can't find my LeWitt review from a few years ago. I don't think I saved the original. It was a 500 word review and it wasn't very good anyway.

Those colors and shapes are an institutional nostalgia trip for me - something about the sixties/seventies - to think the institutional environment was shaped by art so much - ubiquity - and general diffusion/cross pollination - functionally, Sol Lewitt is pop pared down to it's means of transmission (the machine). And fine art is of course "pop" in a sense - I can't make those kinds of distinctions anymore what with the advanced state of the internet and the almost erased line between graphic design, illustration and "free expression."

Those pictures remind me of snack time, recess, text books, playground monitors - the products of the diffusion. A trip.

my mom painted lines and arrows and things in our bedroom when my brother and i were young in the 70's.

wish i had some photos.

Thanks for the heads up Martin. I am going to see the LeWitt exhibition on Saturday and write about it for artcritical.

I'm actually going to see it tomorrow. It will require a total of five hours of driving. Have a nive T Martin.

from glens falls to fort edward to schuylerville to greenwich to cambridge to hoosick falls (my hometown) to pownal to williamstown to north adams.... the map link says that route is 2 hours 5 minutes one-way.

will the williams college museum be open tomorrow? i recommend checking out that little pre-show at williams.

It takes me about 45 to get to Glens Falls so the route I have planned is shorter. It snowed here in the morning so I am changing my trip date to December 21. I am going downstate for over a week then. I plan on stopping at MassMOCA on the way (I will wait and see if they send me a press kit and catalog before then.) downstate on the 21st and then when I go into the city on December 23rd I plan on seeing as many shows as possible (I hope to review at least three of them) and will be jamming with friends in the evening. Noise rock yeah! Thanks for the directions.

Glad you liked LeWitt. Every time I go in I see something new. Just wanted to let you know that if finances are tight, there are passes available at most libraries in Berkshire county as well as some in bordering New York and Vermont libraries. I don't know about the rules in VT and NY but if you have a library card anywhere in Mass, you can check a pass for MASS MoCA out of the library. That said, we deeply appreciate your willingness to pay admission. We rely on the gate to keep the doors open and the lights on!

Also, re Anonymous's query about catalog. We don't have a catalog yet, hope to have one by March or April. We couldn't get all the drawings photographed in time to get a catalog to a printer to get it back by the opening.