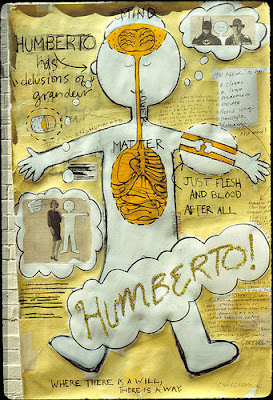 Welcome to my ongoing Quarter of a Career retrospective.

This is maybe the first Humberto painting; note his brain - it's a potato! Humberto is a hater. Humberto has delusions of grandeur. Humberto can't take it anymore and commits suicide by eating a poison potato. Here's a detail of his potato soul leaving his body. Humberto achieves a higher state of awareness. Humberto's autopsy. Humberto comes back with super-powers and armor.

I eventually discovered that Humberto Maturana was a REAL PERSON, a scientist, and a noted doctor in the Chilean School of Biology of Cognition. An expert on the nature of time, metadesign, and the ontology of observing. Here is his personal website; I swear to god that if you watch the opening graphics at one point a potato flies across the screen.*

My plan was for Humberto to become a *star* and to make character goods, keychains, endorsement deals, maybe even a cartoon! Unfortunately, the five Humberto paintings I debuted at the Philadelphia Art Alliance in 1991 were unfavorably reviewed by Ed Sozanski in the 10/24/91 issue of the Philadelphia Inquirer - "Martin Bromirski's large cartoonish drawings are the least compatible with the show's overall tone and tenuous concept". Alas - the artworld was not ready.

All of my Humberto paintings continued with the black/white/yellow pallette I had started with the potatoes and are all works-on-paper. EVERYTHING I made from late 1989 until 1999 was on paper. Paper only. I almost always began with a layer of yellow legal pad paper as a ground. I was so pissed when Ellen Gallagher came on the scene gluing notepad-paper grounds too, although I understand now that she wasn't copying me. But still!!

*I had no internet in 1991. I learned he had written a book and ordered it not having any idea what to expect. My how times change! Things are so much easier now. That book was COMPLICATED. Now that we have e-mail and internet I think I will forward this post to the real Humberto!!!!!!

Didn't you forget to put "Private Collection" after Humberto Has Delusions of Grandeur? I feel so dissed.

Wait! Shortly after the 'potato' flies across the screen, there's a woman suckling an infant AND a dog! Seriously...