My village is for sale!! When I was in NYC last month I talked to a FAMOUS GALLERIST who told me that s/he is thinking of buying property in the country... hey, how about in or around Hoosick Falls???

We have many nice houses available... and some landmark buildings that have hit the skids. Some of these would make great live/work studio buildings.

I was just there a couple weeks ago, taking care of Paco. C'mon, let me show you around! 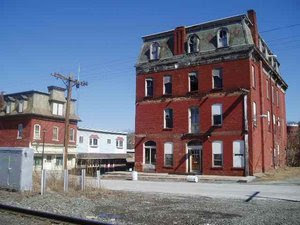 This is called The American House... it used to be wrapped in porches on all three floors. We used to come here and eat pizza and play pool. My grandfather was in a club called the Derby Club, which met in the bar.

That brick building on the far left used to be a small market called O'Dells, ran by Mary Jane O'Dell and her mother. We would go there for the penny candy. I think Mary Jane is still around, but I haven't seen her since the last time I went to the Kiwanis Chicken Barbecue (at the church where the real Natty Bumpo is buried). 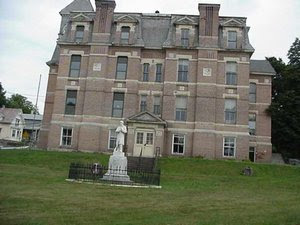 This is St. Mary's Academy, where we went to school. My parents and three of my four grandparents also went to school here. I actually remember being in school here and thinking that these would make nice apartments someday. 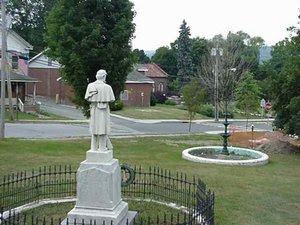 I heard my first dirty joke down on that corner, by the stop sign, about a lady looking for her dog, named Titswiggle. Have you seen my Titswiggle?

Officer Royal Howard used to stand in that street so we could cross.


This place has no special memory, but it is BIG and for sale, for only $150,000! Check it out. Yes, that is the top of the American House in the background (the back view). 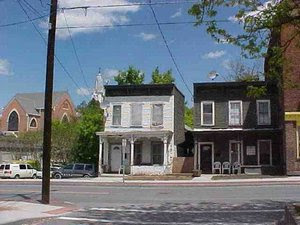 Okay.. you can have BOTH of these houses and that lot to the left for only $75,000! Junky but cheap. In the background you can see the St. Mary's church. 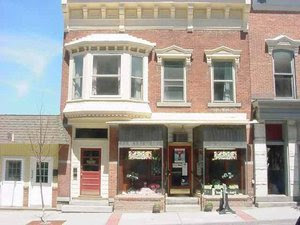 Here's a nice building for only $189,000. That is Don's Barber Shop next door... I showed this place before (remember my WARNING) .

This is almost directly across the street from the window where Grandma Moses' paintings were first discovered! We actually ended up living in one of the apartments above that store for a short time. Here is one of Grandma Moses' pictures of Hoosick Falls....

Have you seen my Grandma Moses screenplay idea???

Confession: I have a painting in the window (of the next-door store)!!! Mine is in the center, back.... here is a better image. This just might be my ticket to the big time!!!

Thomas Moses, great-grandson of Grandma, also has stuff there.

- Valerie Sutton has a lot of good ones - i used to be her paperboy, and play in her haybarn!
- At-Home Realty
- Martinez Realty - his father was the town doctor!
- This one I know for a fact is in great shape, for a really good price. He is my sister-in-law's step-brother.
- Here is one that might be made nice, for $52,000.

i am starving for kiwanis chicken barbecue right now.

It's much cheaper than in Tbilisi ! Wow.

Umm...these days I spend countless hours perusing real estate in New England and the Pacific Northwest, looking for that ideal escape from NYC. This post has the gears turning at a good click. If I owned a car, Hoosick Falls would be a terrific option, especially given the proximity to both the Catskills and Adirondacks..and that of neighboring towns like Bennington.

Thanks for the post. Too bad I can't yet afford to buy. First comes the beater car, I suppose, then the real estate. Damned money.

Hopefully Brice Marden is reading and will buy, and be inspired.

My wife and I have been looking at St. Mary's as an investment business/event hall hotel...whathave you. Do you have any other information about the place. Does it have a parking lot? BTW I can't believe Grandma Moses' museum is not in Hoosick...what a crime! Anyway great blog

yes, there is a small parking lot on the other side of the building... but it is very small.

above that, there is a nice big flat grass lot (former playing field) which may or may not be part of the available property. the lot is between the school and the former convent (now a private home). i don't know if the lot went with the convent or the school...

what info do you want? something specific?

i think that whoever tries to make something of that place will get a lot of respect/support from the community... lots of former students around who do not want to see it get any worse.

i don't think the building has been used since maybe 1990 or so, not sure.

for grandma moses - we have some plaques, her burial site, and there is a very big mural reproduction, which is being repainted this summer i think.

Thanks for the info, we actually contacted the realitor the other day...amzingly enough they answered back on the holiday...anyway they state there are 100 parking spaces...where we have no idea :-) They are sending us more detailed information and commercial uses that the town has agreed to so far...I guess the stripclub idea is out lol! Anyway we hope to get back out to New York (We're in Paris on business...yes really) the 1st of July and we are looking to get out there. We have family in the Lake George area so it's a quick hope over. We'll keep you updated

-oh yea we'll update you with some pictures of the protest house...should be interesting :-)

Hey, I invest in the area. I read a couple of entries where you expressed angst over continuing your blog. Continue it! It's interesting, even though it isn't exactly my cup of tea, since I'm not smart enough yet to appreciate art. Nevertheless, it's cool to see technology (like a blog) and Hoosick Falls going together.

wow that brings back memories ...my grand father is Royal Howard. i remember going to the american house every friday