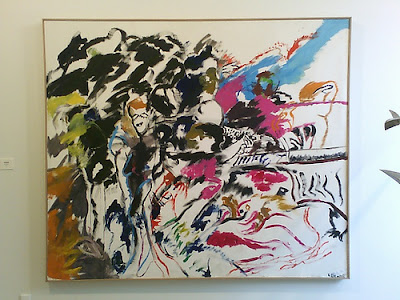 Robert Colescott at G.R. N'Namdi - one of his last paintings (he's still alive, but not able to work anymore), and one of very few abstracts. this was a treat for both those reasons, but also because i just saw what is probably his most famous painting only a few weeks ago.

Joe Fyfe at Cynthia Broan - circus-y, they feel happy. i preferred the ones on white grounds.

Michael Rodriguez at Oliver Kamm - these are really cool paintings, with a danger feel. if i had better photos i would post one, but the cellphone camera just can't get the subtle colors and textures. orderly bubble systems on faint pastel grounds, kind of Matta, splattered along the bubble axis and structure with what first looks like paint, then drippy colored sand, then swiped felt... but is actually colored flocking.

Margo Victor at Venetia Kapernekas - went to this one specifically on the advice of brent, because he was so dead-on about wade guyton last year. it's a good show - though i definitely preferred the two videos, especially the short margo victor 2000, with the colored lights and muffled noise, and retro sci-fi tv signifiers.

Per Enoksson at Derek Eller - some interesting works on big sheets of paper, nice mix of line with drawing, wash, and collage. fun. makes you want to break out the ball point pen and get to work. chris domenick in brooklyn had some interesting-ish ballpoint pen drawings also.

Tala Madani at Lombard Fried- saw the one that was on paintersnyc and was surprised at how small it was. this is the same gallery that had the good cao fei show last time.

Yutaka Sone at David Zwirner - i thought the wintery paintings were fun, but the show was hurt by the dead crappy paperweights. zwirner was an unexpected letdown.. wasn't into the other shows at all, not even with free food. rirkrit can be a snooze, sorry.
Posted by Martin at 4:30 AM

A Fyfe with evening light is imbilous indeed..