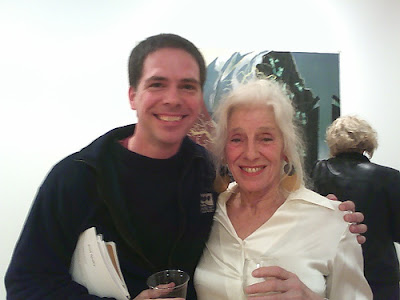 Jo Baer at Alexander Gray - this gallery was closed when I visited, but they let me in to look, and told me to come back later for the opening... which I did and met Jo Baer!!! This was the night that Barnaby wouldn't go out with me... but I had fun anyway!

She was so great telling me about her paintings... she really moves like a dancer.

There are two big unstretched white paintings on opposite ends of the gallery... about which she said it is interesting to hear the different American and European responses - with one painting the Europeans always pick up on the gestapo, with the other painting Americans always pick up on the lynching. Talking about that lynching image, saying (something like) Marlene says why don't you make that stronger, I'd make that stronger... she was talking about her friend Marlene Dumas!

The hanging man is on the far right side of a canvas filled with leaping antelope, flamingo, a ballerina... all of it - aargh I wish I could remember her words - but all stuff of bodies stretching and reaching. She had a better description but I don't remember because my head has only stored the images of her sinking her neck into her collarbone and stretching it back out again... I didn't get it but she was being a flamingo! Her whole body was stretching and like dancing as she explained.

About her famous Artforum letter, in defense of painting... I think she is interested in blogging, or at least in being able to update the textual parts of her site whenever she wants. Someone is working on that with her. Make sure you check out the "book" section of her website....

I need to find and scan in her other famous essay... "I Am No Longer an Abstract Artist." The opening was on a rainy weeknight, so not a huge turnout... but I met Joan Jonas and got to thank David Reed for his part in putting together High Times, Hard Times (Baer was in that show).

Best surprise was getting to see Judith Stein again... she is so awesome. Nobody looks at and talks about art like she can... super intense, smart, and focused - but in a kind-of dreamy way. Judith did this very good interview with Baer. It was funny... in that room were two previous thumbs-uppers (Kaplan and Stein), and one previous refusal (Reed).

Wow.. I just found this archive of Stein essays from her Morris Gallery years.
Posted by Martin at 5:00 AM

Martin my brotha! It was a technical snafu I swear! And look at what I missed..

next time I swear..and it will be EPIC.

Judith is one of my favorite peoples. I wish I lived closer so I could hang out wit da the both of yas.