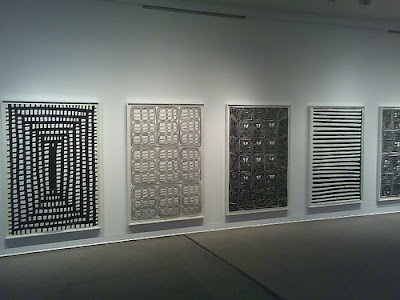 It's impossible to figure out - without looking at the labels - which stuff is from '96 and what is from '07, but I really tried... thinking maybe the earlier stuff had more verticals and columns, and the newer stuff had more mazes and horizontals included... but that didn't work. Is that a good thing, or not such a good thing? I don't know (but feel like maybe no), and the total effect was unfortunately underwhelming. Much more enjoyed this Siena experienced EXACTLY one year - TO THE DAY - before.

The 1996 drawings were made to accompany Geoffrey Young's book of poetry, Pockets of Wheat. Compressed in reproduction, surrounded by text, formatted on a page... they look great. CONTEXT IS EVERYTHING (?). I think the 2007 drawings were made because the book is being re-issued.

Signarazzi - when I signed the book I saw that the previous visitor (to sign) was painter Alexi Worth... his stuff is awesome. Also, curious and paging back, I saw that Jerry Saltz and Roberta Smith had both signed earlier (Geoffrey Young's publishing company is the one that published Jerry Saltz' book of essays).

PLUS: Judith Linhares will be giving a lecture - Wednesday, September 26, 7pm - at the University Art Museum.
Posted by Martin at 3:30 PM

M-
After reading your latest post and then this one I've determined that you have a thing for windows.