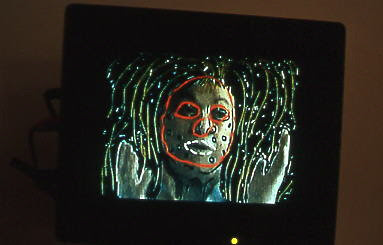 The Eric Fischl lecture Wednesday didn't go off, there was a sign posted on the door of Solvent Space about some sort of travel difficulty, so instead I visited the show at nearby Artspace.

Angela Willcocks is really good! I'm glad that lecture was cancelled or I may have missed these. She's showing seven postcard size DVD animations, each running on a short loop, each based on one of the seven deadly sins.

Vanity - Starts off with an old woman looking at the camera and explaining the different changes and cosmetic procedures she would like to have - "I would love to have slanting eyes, like this", "naturally my teeth should be much wider and sharper than they are now", "I would like to see better" and "be able to give a really big smile, like I used to".

Funny thing is that as she is descibing these things and more animation lines are added she actually does begin to look more and more strong and magical and powerful, like a monster lioness. It doesn't seem so much like she is overly-concerned with her appearance but that she would like to be stronger and more vigorous, FIERCER and immortal. Really great.

Lust - A little golden boy, blond hair and ruby lips, shirtless (filmed from the shoulders up), standing under hot lights, running his hand through his hair and following through with a seventies finger snap and point to the camera, saying something like "pussycattin' baby, sexy!", over and over. Like some seventies six-year-old practicing his pick-up lines in the mirror, he doesn't seem to understand exactly what he is saying so the intonation and accent is different each time. Alternated with some disconcerting mugging and posing and pouting for the camera; he may not yet understand the language of seduction but even at this early age he is clearly becoming literate with it's images.

Hate - A little boy or girl, maybe the same from Lust, standing in a kitchen looking at the camera and shouting "I hate you!" - each shout is a different take so it isn't exactly the same sound each time, and with each shout a different scratchy and kinetic animated drawing is superimposed over his head and shoulders. For example: a priest's collar, a Ku Klux Klan hood, a black ski-mask, an Osama Bin Laden beard and turban, a Jewish guy with the black hat and long curls, a skull. Sounds corny but it is effective.

Jason Coates on Angela Willcocks and the two other artists showing at Artpsace here.

I have to admit that I enjoyed the girl's craft and the processes that she used to arrive at her work. The animated pieces were very interesting, visually, but I think the general theme is a bit hack-ish, here, in spite of its "Tried and True"ism.

I thought there were some really good elements to the ways in which she worked, but for an immigrant, her arguments against America are pretty weak and simple-minded, and that pretty much robs the work for me. We're lustful? I thought we were supposed to be Puritanical!? When did this happen? And "Greed," although remaining true to its impulsive nature, lacks depth when compared to the loaded imagery in "Gluttony" and "Hate."


The danger of inserting politics into a work is that your work becomes just as dated as the views within... the whole undertones of Blood for Oil in "Gluttony" really missed the mark for me. "Hate" was well-done and one of my favorites, I think it would make a fantastic public service announcement. I do think, that for the most part, it misses its primary intended audience. Where's the fun in that?

Less Enthused - Yes, I understand some of what you mean. We should explain that the full title of Willcock's show (or piece)is the trite Seven Deadly American Sins, something that I didn't even notice until after going home and reading the postcard.

I've lived abroad and have found those seven qualities to be fairly universal - that was how I approached the work. The carping political stuff and some of the visual cliches didn't disturb my appreciation of most of the work, especially the three mentioned in the post above.

Thanks for posting your thoughts. Please do so more often.