What Comes Naturally, curated by Glynnis McDaris, at Fake Estate - a show of flowers in the tiniest gallery in Chelsea, it was like being a bee in a perfect ikebana arrangement, with the gallery as vase.
Posted by Martin at 12:13 AM 2 comments 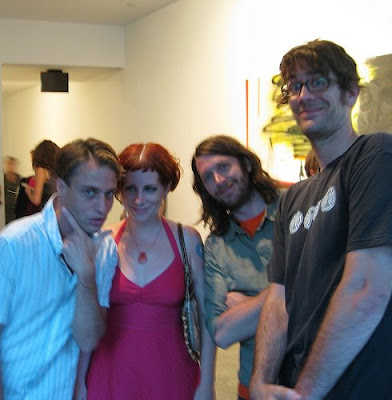 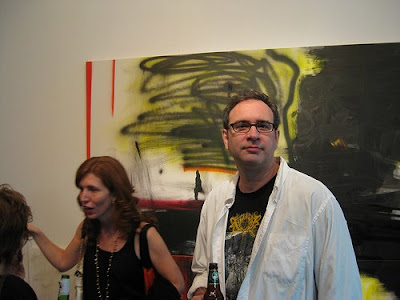 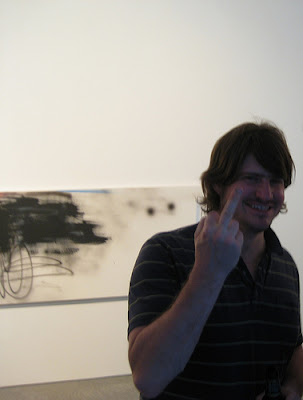 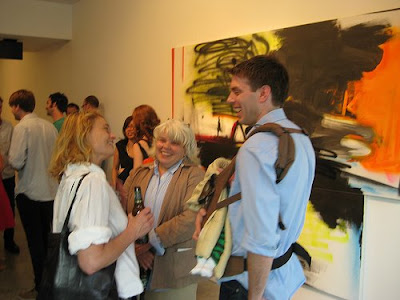 Inna Babaeva with Michael, his mom, and baby Avery.

Wish I'd been a little more focused on taking photos, but I got caught up in meeting people (Krixfort!).

Click here to SEE the installation shots of the show.
Posted by Martin at 4:58 PM 10 comments 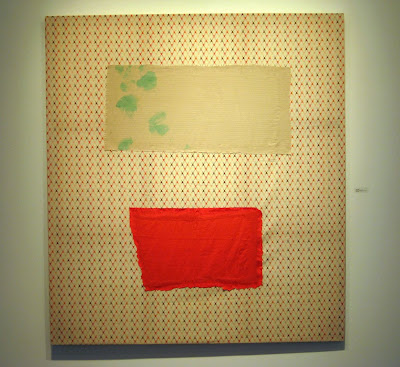 Joe Fyfe, Spider Painting, 2007 - a spider-patterned sheet - black and red spiders - stretched... with two pieces of fabric on that, one with paint stains. 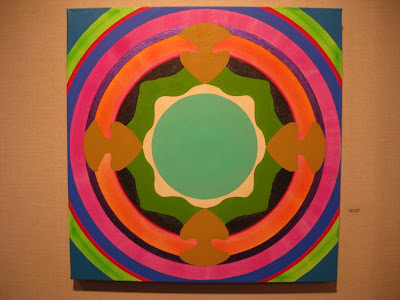 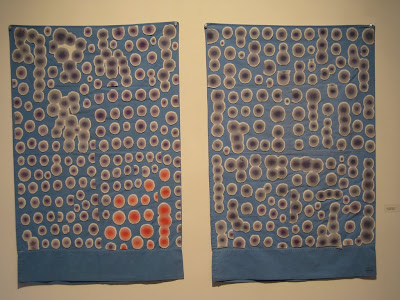 Polly Apfelbaum, Two Blue, 2000 - on pillowcases.... they're stained circles of fabric, like spores. 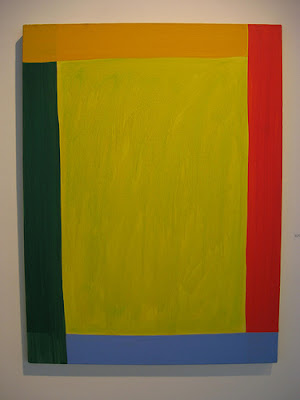 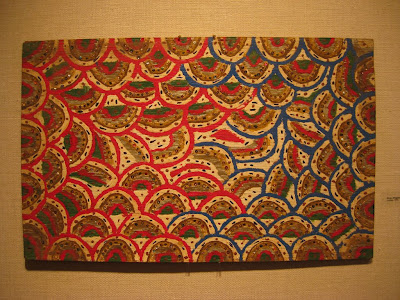 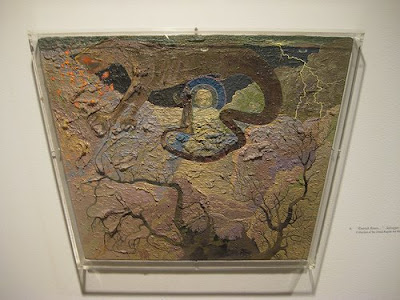 Jess often incorporated the frame into his work, using frames found at thrift stores and flea markets. This plexi-encased piece pictured above isn't an example of that... it was added years later for a museum exhibit... but I love it. 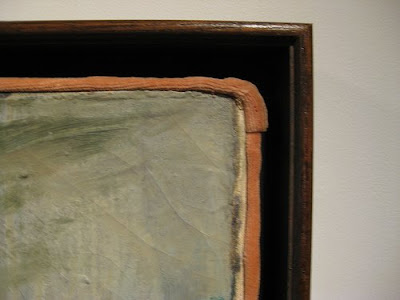 Detail of a Jess painting set in frame, wrapped at edges with something velvety.

Al Loving surrounded some of his paintings with something soft and velvety also.

(first time i saw a jess was in a group show at the pma, when reason dreams, which included mildred greenberg... sam hand-wrote out the complete list of participating artists)
Posted by Martin at 12:15 AM 3 comments 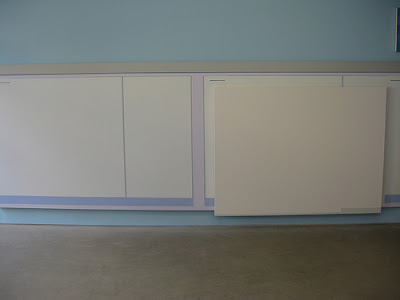 He has re-booted the gallery storefront inside the gallery... a window has been dragged.. there are scuffs. 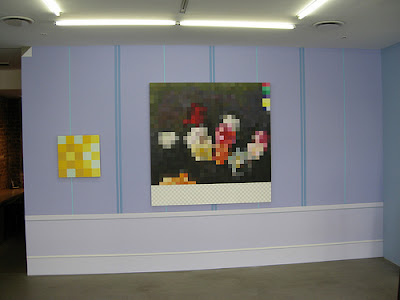 Wall is painted like a computer version of a domestic space, hung with pixelated paintings. Try not to click on that upper-left corner. The painting on the right is a low-res image lifted from an album cover... the bottom hasn't finished loading. If you choose to end the program now you will lose any unsaved data. 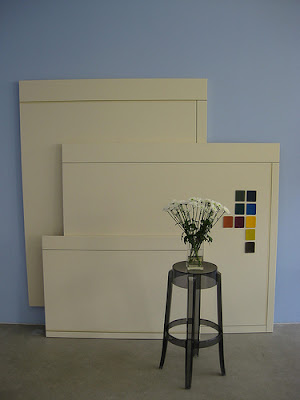 Color swatches can be removed and added... the office has a huge stack.. you can download and arrange your own. The flowers will droop and die while you wait for it to come into focus. 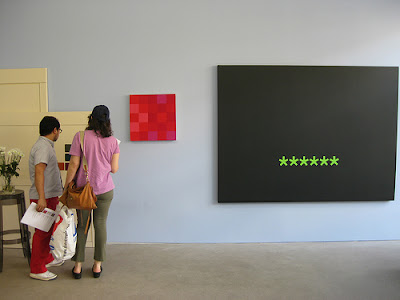 Not pictured are the solid 3-d macro-pixels stacking up in the window at the front of the gallery... not sure what is being transmitted, they can't be opened.... the information is not within but cumulative.

Interview with Michael Zahn.
Posted by Martin at 11:22 PM 2 comments 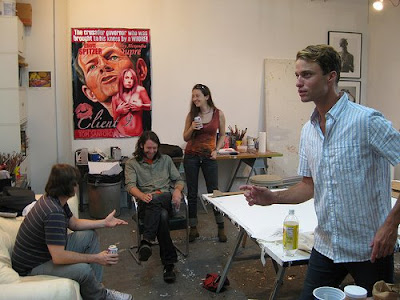 Pre-party (prior to going to Wendy White's opening) at Tom Sanford's studio... Tom Sanford, Eric Sall, Meridith Pingree, Barnaby Whitfield. Thank you to Barnaby for standing so still, I am the worst party photographer EVER... all of my photos from the opening include at least three very blurry central figures. I'll do some cropping later and post what I can.

Here is a better picture of Tom and his recent work... not sure what might still be in progress, this is the studio... click the picture to see it larger. The piece at top right is the announcement he painted for Amanda Browder's show Cyclone, at Green Lantern Gallery, in Chicago.

ride to opening with tom, martin, meridith, eric. this is what most of my photos look like.
Posted by Martin at 1:35 AM 11 comments 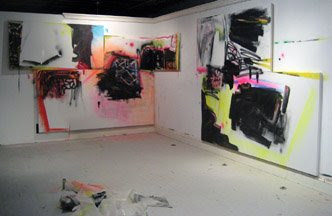 N. Elizabeth Schlatter has published a book, Museum Careers: A Practical Guide for Students and Novices.

Speaking of books... I'm enjoying Goodreads, especially as a place to find good books and to easily keep track of books I'd like to read. Not so into the Facebook applications and all the junk that comes with them.

PLUS: some photos from interesting shows seen on my last visit to nyc... wish i could post more on them, but i got overloaded -

Susan Hiller at Timothy Taylor Gallery, at the Armory - it was like a solo survey show, the whole booth was for her... I don't think I've ever seen her work before. Here are some more photos.

Dave Miko, at Wallspace - kinda liked these failed paintings made into stools.

Miriam Schapiro, at Flomenhaft - this was also a survey show... rewarding.
Posted by Martin at 1:00 AM 20 comments 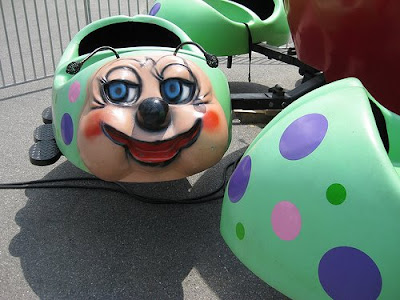 Someone left an anonymous comment yesterday morning (thanks!) noting that anaba is mentioned in this week's NYTimes Magazine... a Deborah Solomon profile of Marlene Dumas -

"An art-world blog, Anaba, has taken to listing the names of Dumas’s supporters and detractors as if they were superdelegates charged with putting an artist into office. Are you pro-Dumas or anti-Dumas? “All of the anti-Dumasers are men,” the blog noted in 2005, in a reference to a group of influential critics that includes Jerry Saltz, the art critic for New York magazine, who has described Dumas’s work as 'flat-footed'."

Also noted in my posts, along with the gender split, is that most of those quoted who don't like Dumas are not artists. I'm not sure which posts Deborah Solomon read, but here are the most relevant -

Jerry Saltz has been consistent, but it has always been in throwaway lines, never an actual review, so I'm looking forward to reading his inevitable review of the upcoming MoMA show. I say inevitable because after that much glib dismissal he is going to have to put up or shut up. Hopefully Roberta Smith will also review that show.

Howard Dean and my mother are counting the superdelegate votes as they come in... I'm told a final decision will be reached in about a hundred years.

UPDATE: votes are poring in!
pro - Eva Lake, Amie Oliver
Posted by Martin at 12:22 AM 11 comments 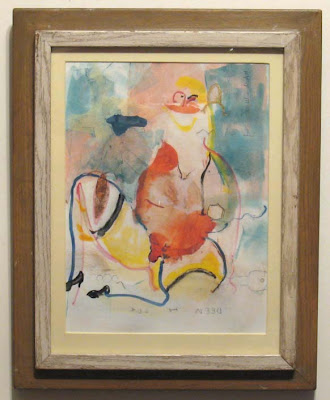 Jon Lutz saw last week's post on Richard Wright, commenting that they used to work together, and has since e-mailed me images of this piece he got from Richard. Jon says that a number of co-workers received work from Richard -

"I wanted to send you (images of) this work of Richard's that I have...get a chance to look at the back of the works you saw? He meticulously records all materials, sizes, dates, and details along the way. This work has 10 different materials... gold leaf, fur, among them..."

Jon says that Richard has moved to North Carolina. No other gallery or website that we are aware of. 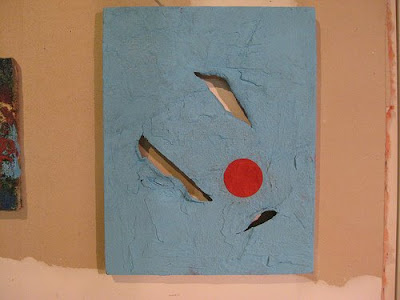 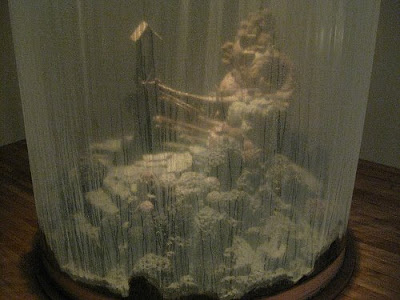 Walter McConnell's misty Shangri-La of moist clay encased in plastic is one of my favorite pieces in MASS MoCA's Eastern Standard: Western Artists in China.

"McConnell's moist clay sculpture reflects China's rich artistic history as well as a fantasy image of the East. Inspired in part by his tours of classic scholar's gardens, the work investigates the way images evolve as they are translated across cultures. This imaginary landscape is taken directly from an 18th-century wallpaper pattern book created by French painter and designer Jean Baptiste Pillement. The condensation produced from the 3,000 pounds of wet clay gives the work an apparitional quality, manifesting the veil through which visitors often view a foreign place. Reminiscent of a snow globe, the work takes on a kitsch quality, referencing - on a large scale - trinkets sold to tourists, and an image of China consumed by locals and foreigners alike"

MASS MoCA now allows photography, and has started a flickr pool and a youtube site. Here is the video of Walter McConnell constructing his piece; it's less than a minute and twenty seconds... worth it!
Posted by Martin at 12:56 AM 4 comments

Eastern Standard: Western Artists in China, at Mass Moca.... I was excited to see this show, as a former Western Artist in Japan (8+ yrs), but it was disappointing. I think there were only one or two artists who actually live and work in China, so the show is more like Western Artists Make Brief Visits to China and Share Many of the Same Simplistic Responses... lots and lots of repetitive photos and video (the medium of the tourist) of shipping containers and apartment blocks.

Wall texts inform that the work "references China's economic and commercial development as well as the loss of cultural and social traditions in the wake of such progress", or "this poetic work subtly reminds viewers of the environmental impact of China's new development". Those are from two different pieces, but you could almost walk around with a blindfold on and attach wall texts, it wouldn't really make much of a difference. They should maybe just all read "tsk-tsk", or "KEYWORD: Three Gorges Dam"... it would have saved some time. I can imagine the roar of the collective Chinese groan. What would happen if every person in China rolled his eyes at the same time? Would the Earth spin off it's axis???

The most off-putting inclusion is Jules de Balincourt's snooze of a painting, previously seen in his most recent Zach Feuer show (scroll down). Why is this here? Thanks for your insight. Please.

It's interesting to see what artists/gallerists (Feuer, Koenig) are evidently still interested in working with Mass Moca, despite Michelle Maccarone's lobbying against it. I suspect that all of the shows currently at Mass Moca are the most cost-effective shows possible, after all of the money spent and wasted struggling through last year's Buchel/MassMoca mess. Lots and lots of easily shipped and insured video and photography, a collector's vanity show (of work by Anselm Kiefer), Jenny Holzer's projected piece (I think Jenny has covered a lot of the costs of her show, she is awesome).

GREAT NEWS is that Mass Moca no longer prohibits photography! They've even started a flickr pool.

NEXT: i liked some of the individual work in Eastern Standard, if not the show. next i'll feature some of the artists i liked... Tobias Bernstrup, Patty Chang, Walter McConnel, Catherine Yass. 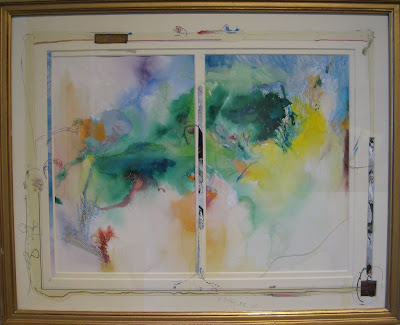 Richard Wright has two framed works-on-paper at BCB Art... the frame, or at least the glass, is part of the piece... he's painted and scratched/etched onto the glass, as well as painted, collaged, and cut into the matting. The gallerist said he works on things for a looong time... this piece (detailed below) is dated 1973-92. 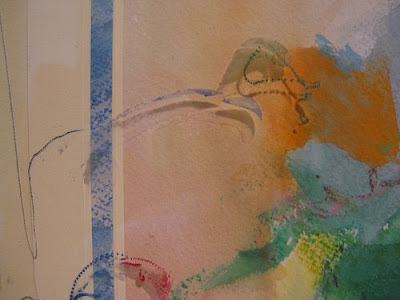 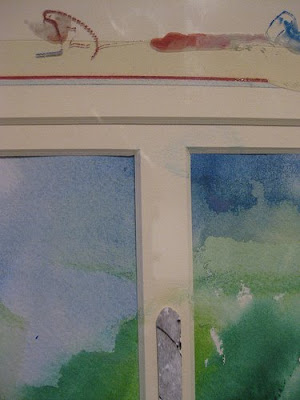 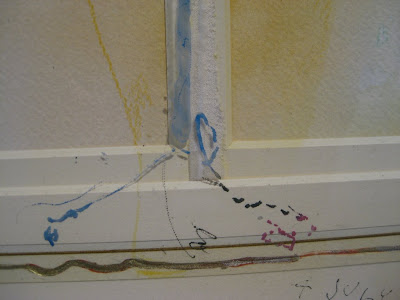 I can't find any more information about this artist.
Posted by Martin at 11:02 PM 11 comments

James Kalm visits Eric Sall at ATM... plus, Before and After photos 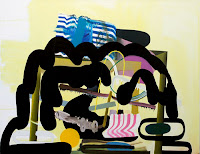