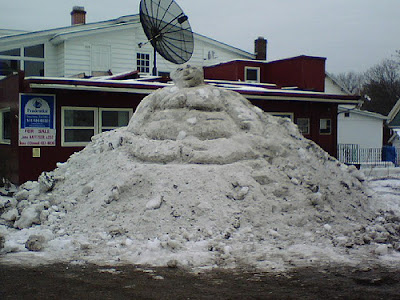 dumpy the snowman.
Posted by Martin at 11:45 AM 9 comments

caucus results: no division on race

William Powhida's caucus results have been posted. It was a nasty contest, but evidently there is no problem of racial division in the New York artworld.

Here are some pictures of the installation.
Posted by Martin at 1:58 AM 13 comments 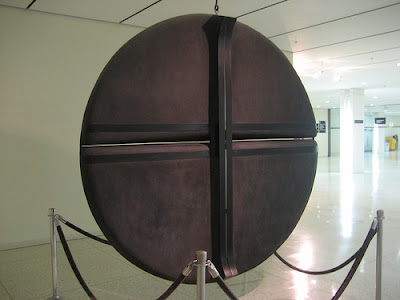 This James Wines sculpture - Grey Disc, 1968, painted cement and steel - is another of my favorites from the concourse underneath Empire State Plaza.

Grey Disc at Empire State Plaza is almost like a proto-Sculpture in the Environment piece.... perhaps the experience of placing his piece within the Rockefeller/Harrison context contributed to ideas leading to the founding of SITE two years later.

SITE is maybe BEST known for the nine BEST Products showrooms, commissioned by BEST art patrons Sidney and Frances Lewis... here is some more info on those buildings. BEST Products has gone out of business, and all but one of SITE's BEST buildings has been destroyed... the overgrown and grassy Forest Showroom is now a church.

Ghost Parking Lot, 1978, commissioned by the Hampden Plaza shopping center. Here is what it looked like when it was still new, and here is a gorgeous photo taken in 2002, shortly before it was destroyed.

Indeterminate Facade Showroom, 1975 - everybody who has been to art school in the past thirty years is familiar with this building. 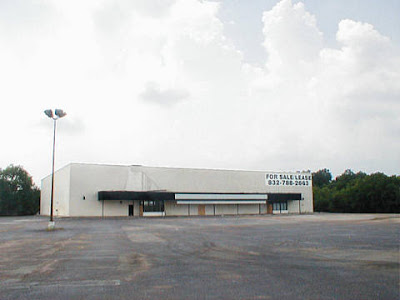 Indeterminate Facade Showroom today. This photo was taken from Diebold Essen's Magellan's Log, where you can see that in this panoramic photo taken in 2002 (scroll right) the original architecture was still extant.

Get a life. If you don't have smart people working at important posts, you get drivel from idiots like Tyler Green, who can stay as conlict-free as the Virgin Mary and still not be worth reading. - posted by walter10021

With your lust for the lash, we should call you "Tailgunner Jen" -- it is people like you, and Tyler Green, and that moron at Art Fag City, who are handmaidens to fascism. The point is -- how's the work, good or bad? Viveros-Faune does pretty good. Can any of you say the same? - posted by walter10021

He's good. WHO COULD IT BE? Oh, here is a walter10021 commenting on an article on De Montebello, quoting Artnet... and another commenting on the blog of Artnet editor Walter Robinson's brother, Greensboro News & Record editor John Robinson.

It is kind of funny now to read this 2004 nickname I gave Viveros-Faune. 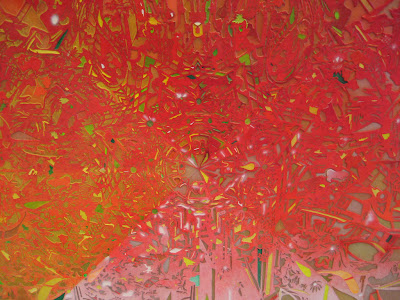 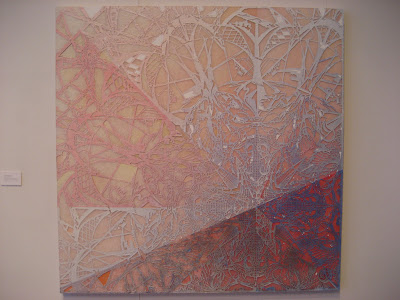 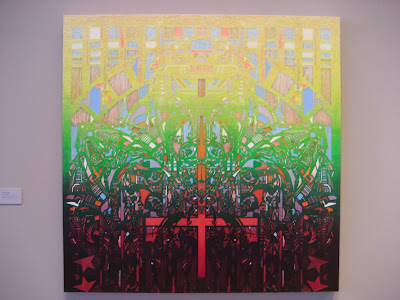 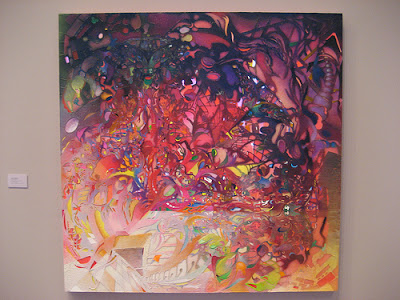 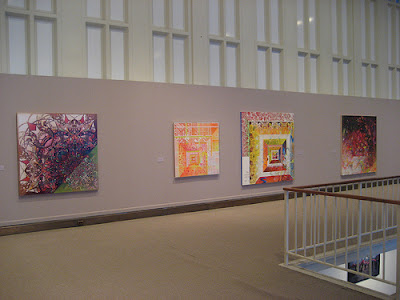 Tyler on a Diebenkorn show -

"I'd been looking forward to reviewing the San Jose presentation of show. But when no one at that museum returned three weeks worth of calls/emails, I gave up".

What does that mean? Is there some process involved other than (1) seeing the show, followed by (2) blogging your thoughts?

He saw the show, right? It was number one on his 2007 top ten list. Maybe it has something to do with getting images...
Posted by Martin at 2:00 PM 21 comments 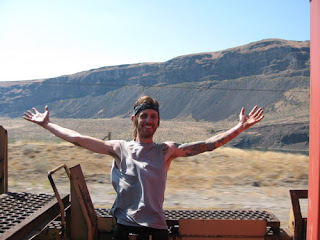 UPDATE: Travis Conner passed away Friday, January 11, 2008. An obituary is posted in the comments. I might make another post later. 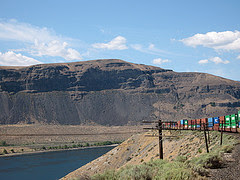 coming into the gorge in washington...

RELATED: Nonesuch will be closing permanently as of February 1st. This was maybe my favorite space in Richmond.
Posted by Martin at 3:00 PM 9 comments 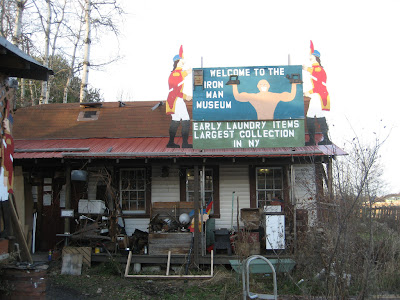 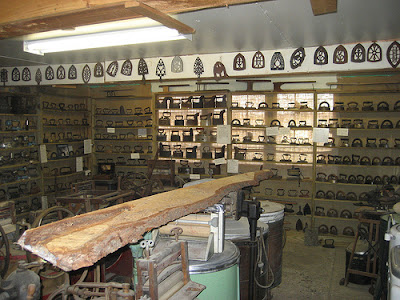 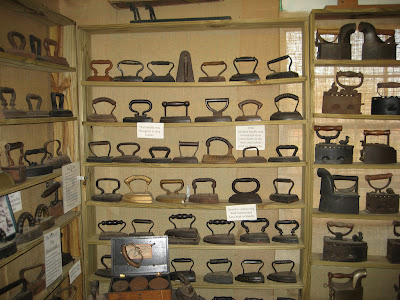 Some beautiful forms... they feel good to pick up. 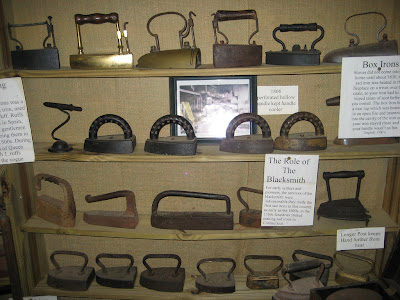 Lots of signs posted talking about the evolution of the iron, all of the different forms and functions. The Iron Man will tell you all about them.

HERE is a VIDEO of the Iron Man giving a short tour, talking about some of the different irons. 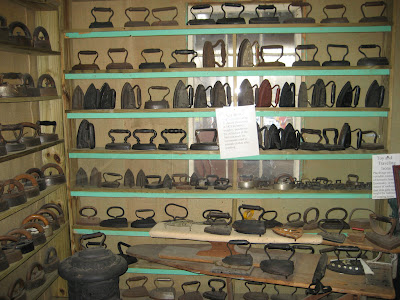 An iron on the stove at left, and an old ironing board. 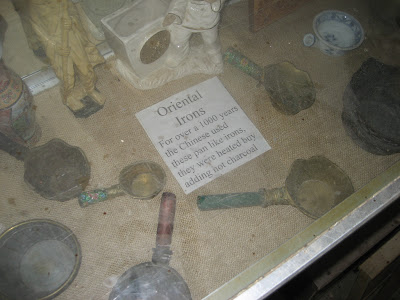 Collection of washboards, and the Oriental Iron case. Click on the picture for a bigger view. 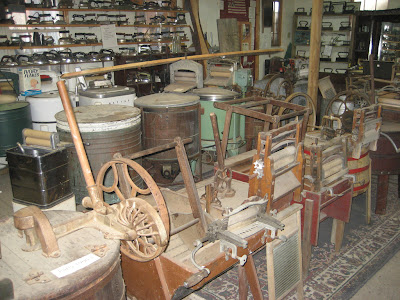 The center of the museum is full of old-style washing machines, starting with the kind you crank your clothes through. 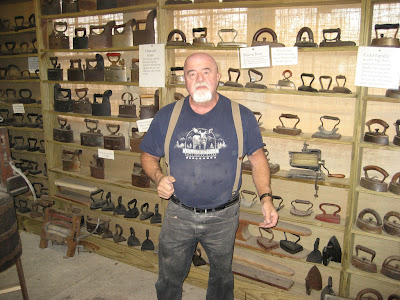 Sadly, the Iron Man is busted and has been forced to sell his entire iron collection at a loss, and is trying to sell his house. He got screwed by the adjustable-rate mortgage thing. I think he put something like $23,000 into assembling his iron collection, and recently sold it for $7,000.

He's only keeping one iron, one of his two favorites. 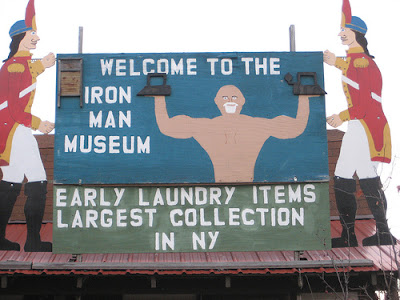 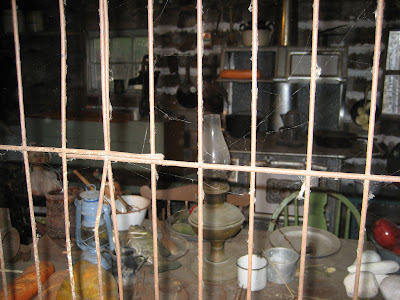 This is the Iron Man's re-creation of a Revolution-era kitchen. Here's another view.

Diorama of a Revolutionary War battlefield.

Fort George - Exact Replica of the Figment of my Imagination.

Do you want some sturdy folky furniture? George makes furniture, from wood, all sorts of very good sturdy funky folky stuff, kind of Adirondack style. It's CHEAP. He's a got a showroom in another building, and can make special request stuff. He's in Schuylerville, NY.... check out the website, lots of pictures of his furniture. 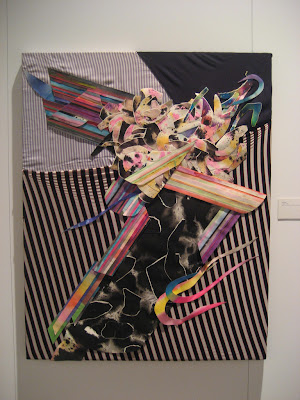 Al Loving, Untitled, 1986, fabric and painted paper collage on stretchers. CliCK here, or on the image, to see it larger.

These Lovings, and one more, are included in a small group show at the New York State Museum. The untitled piece above consists of three pieces of loosely draped fabric over stretchers, topped with a collage of stained and thinly painted cut paper shapes. IT'S PERFECT!!! I'm not sure how the paper construction is attached to the fabric, without pulling it down. 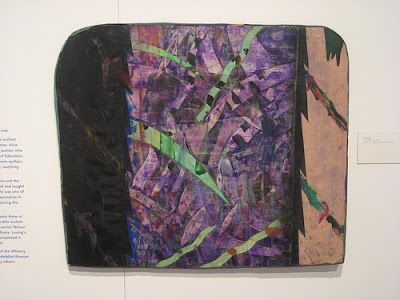 This one is layers of overlapping and painted cut paper applied to some type of panel, and painted over.

The edges are kind of wobbly, with something soft, like felt, applied all around the sides.

RELATED: interview with Al Loving, biography
Posted by Martin at 1:50 AM 6 comments 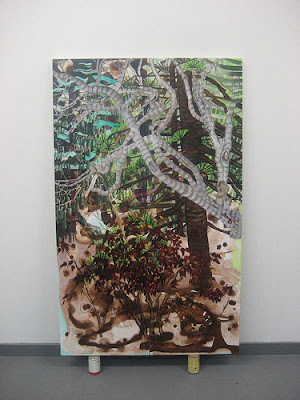 Elisabeth Condon was at Yaddo last month, and we hung out a little bit. Here are some pics from her open studio, held shortly before she left -

All of these people are fellow Yaddo residents, artists and writers, gathered in Elisabeth's studio an hour before dinner. Yaddo is very strict about dinner.

The guy in blue is Elliott Levine, the blonde woman is an artist from Iowa, and Elisabeth is standing on the right, holding up a book. She gave a short talk about her work and influences... she's been inspired by Chinese landscapes and poetry.

UPDATE: the blonde artist from Iowa is Laurel Farrin!

Roland Flexner was mentioned, but I'm forgetting what other specific artists were cited, although considering her work now while looking at these photos I'm thinking a little bit of Max Ernst.... partly because of the discovery of landscape through process. 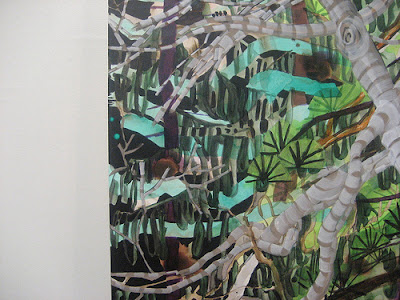 It's wild. Every conversation you overhear, on the streets and in the coffee shops, is about the candidates. Right now I'm in Manchester NH, location of tonight's debates. 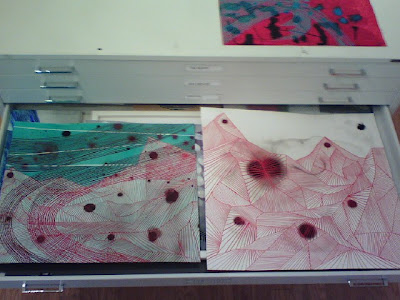 Jennifer Hodges, at Nahcotta, in Portsmouth.
Posted by Martin at 7:00 PM 1 comments 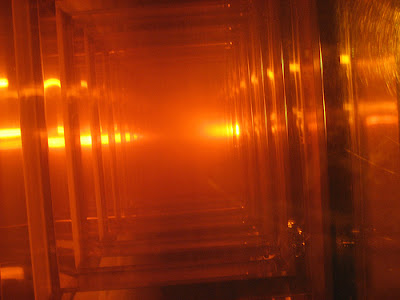 This is the Donald Judd that Jen Graves was delighted to discover last month, and here is the Conrad Marca-Relli she regrets not getting an image of.

William Powhida is soliciting nominations for his New York Enemy/Ally Project, something for a group show at Schroder-Romero opening next week.

- THINK before you submit, because I don't think you can get back into the survey site once you have nominated. I just did it quick to see what would happen, only wrote in one name, and didn't include any reason.... now I can't get back in to add more names or elaborate.

Joanne Mattera on Martin Puryear at MoMA, with some gorgeous atrium installation photos. I saw the 1992 retrospective at the Philadelphia Museum of Art (coordinated by John Ravenal)... it made a big impression.
Posted by Martin at 4:00 PM 2 comments 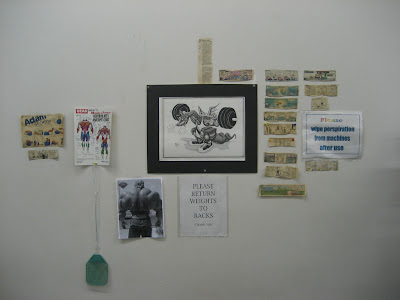 The Artist's No-B.S. Market Report got more responders than I had expected over the holidays. Keep commenting, and I'll post the results next week.

Plus, I'm remembering more favorites that I didn't include in my 2007 post...