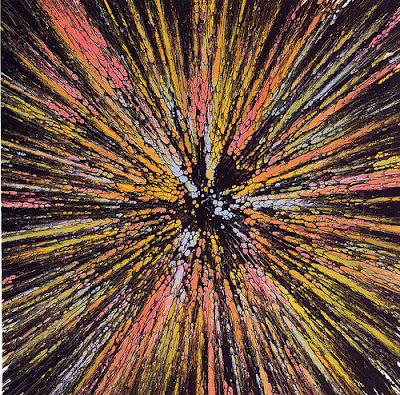 I borrowed an art book called post-hypnotic from the library and only after I had checked it out did I discover that Tom Moody wrote one of it's two essays (the book's main author and curator of the exhibition is Barry Blinderman). Later I was looking at the cool painting pictured above and was so surprised to see that it was created by Artnet editor Walter Robinson! Nice!

It's one of two spin-art paintings he has featured in the book, both very different. He mentions them in the last paragraph of this artnet post in relation to the sale of some of Damien Hirst's worse spin paintings to MoMA. You can see a third example in this 1997(!) artnet review of a Hirst show. Robinson is also known for his body of pulp fiction cover like work, which bring to mind Richard Prince's nurse paintings. I like Robinson's spin paintings much more than Hirst's... and the roulette wheel and and dizzy(?) drunk of this piece relate interestingly to the spin stuff.

You probably think I'm making this huge suck-up move to Walter Robinson, which I partly am, but I'll sabotage it by sharing that Robinson thinks I'm a moron. He sent me this in an e-mail a while back -

"thanks for the stab in the back -- I'll try to remember it in the future... tell your readers for me that I think you're a moron"

So there you have it, Walter Robinson thinks I'm a moron and wants me to share that with you. That sucks. The funny thing is that the moron e-mail was preceded by an e-mail only the day before which included -

What does that mean though where he says "I'll try to remember it in the future"? I'm going to get panned on artnet or something? No more Richmond reviews on artnet?

UPDATE from The FUTURE: Okay, it is 10/2007, and I did not get into Geisai Miami, of which Walter was one of the judges. Touche, Walter!

Do you know, there is a Hirst Satire at Prague now, with a Saddam like that shark by David Cerny, a czech artist ?
Source:
http://tinyurl.com/9pouc
Wonder, what you think about that "political" impact, instead a shark, a maltreated Saddam.

The Hirst spins I find weaker, but find some of his art very strong f.e. the Medicine racks, and the Cigarette butts stuff. Also I was impressed by that Cow transverse slices, 20 or more (?), I found that much better than the shark. I saw all the originals in Berlin.
Why is this Hirst bashing going on ?

I think it is all an Optical Illusion.

Hi Martin and all,
I think the Saddam link is pretty neat. That aside, Richard Prince is a really good artist and I think everyone should go see the show at Gladstone. $60 from Broad St.

Did I miss part of this story...Why did Walter say you stabbed him in the back?