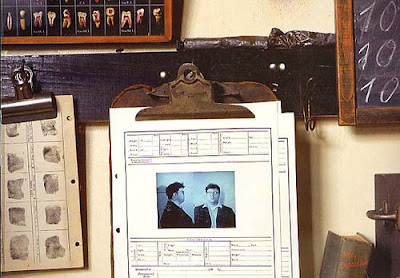 Oatman does a lot of collage work and is concurrently included in Mass Moca's Becoming Animal show with a bunch of his collages. He has some collages at the Tang of very cute birds wearing helmets and armor and a few of warplanes arranged like snowflakes. I also like the one of a train lifting off it's trestle and spinning up into the air. I think I saw that one at an Arts Center of the Capital Region show once.

Oatman was involved in the original Factory Direct show, organized by the Arts Center of the Capital Region's Gina Occhiogrosso, as well as a New Haven follow-up. I'm not sure if he was included in the first as an artist or if he was a co-curator or what, but I know that for the New Haven show he was a participating artist. The Factory Direct shows placed artists in residence with local manufacturing industries.... similar to the Kohler program. Oatman was placed with Tower Optical - a company that makes those coin-operated viewing binoculars you find at sightseeing spots.

A Romance in Optics is the title of that Factory Direct installation/video presented here. Tower Optical made a portable one of those viewing machines for Oatman which he took to Easter Island and set up for tourists to look through. He also asked each person the question "if you could see anything, anytime, anywhere what would you most like to see?". The video is very quiet, just a kind of spooky music and muted voices and ocean, and the answers spin into view on red discs -the time when Jesus Christ lived on Earth, Peter the Great in Moscow, the eruption of Krakatoa, I'd like to see here about 2,000 years ago, I'm happy with the present, the big bang, I'd like to meet Abe Lincoln and see my grandparents. One young woman looks away quickly and says "my friend died when we were seventeen, I'd like to see what her life would have been". The best is a smiling man who points off into the distance and says "I'm going to find the red-tailed tropic bird very soon" and later in the video shows up to say "I've done it! I've seen the red-tailed tropic bird! I'm happy". I liked this video a lot. Finding a good video might be like finding a red-tailed tropic bird.

The photo above is from his 2001 piece Taken, a mugshot video of him confessing to all of the bad, unethical, illegal, immoral things he's ever done. Lots of sighs. A good one is the story of how he left a museum with a paint chip from a Picasso painting. Hey Michael, look at this.

Interview with Michael Oatman. Here are two photos of pieces in his show (photos from previous installations).
Posted by Martin at 8:30 PM

I mentioned this to you last week - I worked with Oatman when I lived in Albany NY(he was teaching at RPI in Troy) and we got him for the cover of the second issue of our art/lit mag salvage. Here's an interview:

and the pic of the centerfold:

Yes, I linked to Salvage twice in the post above - the Oatman interview and Gina Occhiogrosso.

Oatman here. I thought one of those tags was missing. Nice. Hope I finally have the "Picasso Police Monkey" off my back... P.S. I was the co-curator of "Factory Direct 1" with Paul Miyamoto, a Troy painter and graphic designer (and all-around swell guy). Denise Markonish was the curator for "Factory Direct: New Haven", and great to work with.

ps. I love your blog