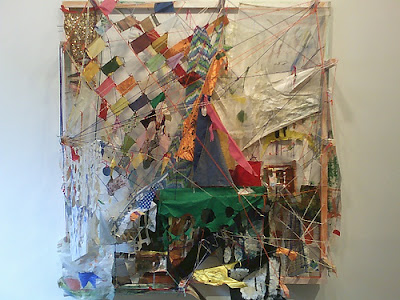 I saw the Lauren Luloff show at Sideshow !!

This was one of the must-see shows for me, one of the shows that I had drawn big stars by in making my list of galleries I wanted to visit.... the other two were Rosalyn Drexler and Jered Sprecher.

I thought I'd blown it because when I got to Brooklyn on Thursday and picked up one of the gallery info papers I saw that so many of the good galleries I'd wanted to visit were closed on Thursdays... I DIDN'T KNOW THAT! How many frickin artists and people live in Brooklyn, and they still can't keep the galleries open? Jeez... even in Richmond you can go to any gallery almost any day.

The newspaper listed Sideshow as one of the closed galleries... so I was pissed, thinking I should have gone to a museum or somewhere other than Brooklyn. I called the telephone number anyway, but no one answered. So then I walked over there, thinking I'd at least be able to look inside the window... but when I got there I found a padlocked door and that it was impossible to see through any windows... but then a man's head appeared at one of the small high windows! LUCKY! I got in.

All of her pieces in this two-person show are wall pieces. Wooden stretchers are flat against the wall, with little wooden poles sticking out all along the frame, from which she literally strings together these pieces. It's all colored string (yarn, whatever.. stringy stuff) and fabric.. pieces of different colored and printed fabric which has been maybe painted on, torn and ripped and stretched across the wooden frames and string support.

I keep associating her work with the Alan Shields from High Times, Hard Times... the materials and grid strings mostly, but also his being really into Buckminster Fuller, imagining stuff built for future geodesic domes. The Lauren Luloff pieces have a similar of-another-mode-of-living quality for me... 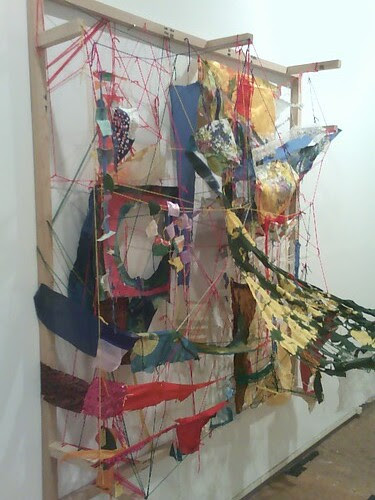 This piece has the cut-up fabric coming out from the piece and suspended from the ceiling... it sort of makes me long for a little bit more installation chaos... or maybe just a closer hanging of her stuff. Lauren's work is alternated throughout the two room gallery space with that of the other exhibiting artist, Paula Deluccia. 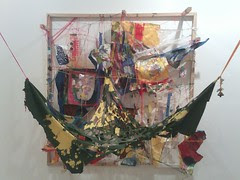 Riotous nest of color and movement.... 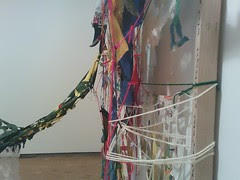 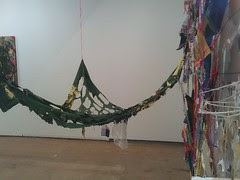 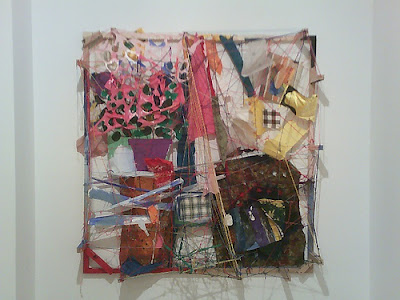 These would look really good in Richmond, at a place like Nonesuch or Chop Suey... I mean that in the BEST WAY.

More Lauren Luloff here...
Posted by Martin at 2:45 AM

I fell in love with Lauren Luloff beginning with this post.. did I ever mention that?