An Assault on Taste 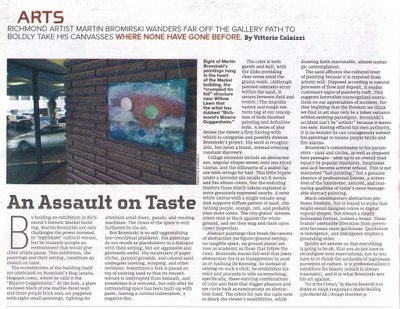 Art of This Century was reviewed in Brick, by Vittorio Colaizzi! CLICK HERE to see it bigger and read the review. 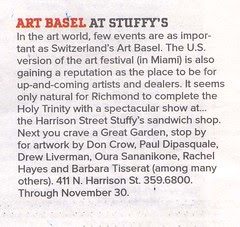 Art Basel: Stuffy's also got a blurb in Brick!

Thank YOU to Brick and Vittorio Colaizzi!!!!!!
Posted by Martin at 4:00 AM

It looks so real!

I'm e-mailing you another separated-at-birth similarity between your painting and mine.

wow martin, that review is intense! What do you take from it? There certainly seems to be relavant things about it- like your work not conforming to standard "professionalist" slick abstraction. And ,yes, your work is subversive on many levels including how you present it (in that building), the way you photograph "thumbs up-ers", the photos of the paintings in the ocean, ect. I mean, in many ways I wouldnt mind if my work was described as "gloriously awful" in this sense of it being awful by standards of current taste. I think of Andy Kaufman in his being genius in his awfulness. And I also think of the love/hate relationship that I think I have and perhaps you have with art- as- profession,as convention, as everything else?

yes, it is intense, and i am very gratified to have so much thought put into my work by such a smart writer. i read it as a very positive review, with some WICKED lines that can easily be misunderstood, if a reader is just skimming. i think most people get it, though.

i hope he writes more stuff about local art... Brick is a new weekly, I think that was his first thing for them.

Ma-IN Bromirski... Colaizzi is on to you and your handsome subversion, only further confirming my suspicions that you are, indeed, a spy. Ever seen the Japanese flag? Eh heh.