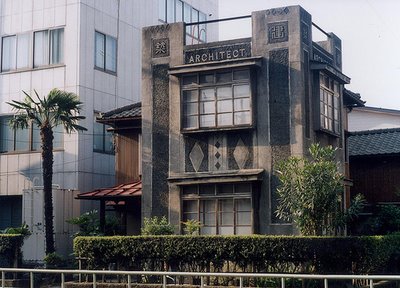 An old house in Japan.. I think this was in Nagaoka, although it might be Niigata. One of those two, definitely Niigata prefecture. I lived in Nagaoka for a year...

I'm (always) trying to organize all my crap, going through old papers and photographs, but I keep getting sidetracked on the content... and wanting to scan things onto the internet. The recent Markel Building post is compelling me to post more examples of interesting architecture.

Isn't this a cool old house? Most of wooden Nagaoka was burned down during WWII, but this looks to pre-date the war. Here is another view, it's almost under the Shinkansen tracks. Nagaoka now holds - on the anniversary of it's firebombing - the biggest and most beautiful hanabi matsuri (fireworks festival) in Japan, on the banks of the Shinanogawa. So pretty... great memory.

I met the most interesting old man in Nagaoka. He was in his 90's, spoke excellent English, and kept a cluttered third-floor office full of amazing things. He learned English in the States, before the war (he travelled all over America)... and after the war began he was assigned to run a prison labor camp, I think in Malaysia. He told me about how hard the prisoners had to work and that every morning he would assemble everyone in the yard for exercise, and give a motivational speech, in Malay. He told me that he would thank them for their hard work and suffering, not having enough to eat, but that after the war was over and they won, everything would be great... "but we didn't win".

Then.. HE became a prisoner. There were so many Japanese spread out over so much of Asia that the best and quickest way to isolate them was to round them up and keep them on various uninhabited small islands. He said they had no clothes, food, medicine, or shelter and that many many men died on the island. I asked him what he ate and he said that they would stamp on snakes and eat them. Their feet were so calloused they were like clubs.

Okay, this is not so much about art. I did this same thing yesterday talking about Press, but didn't like seeing all that on my ART blog, so I moved most of that biographical text to the comments. Maybe I should start an Interesting Old Man blog... it would include Fred, Paris, Haigh Jamgochian, Charles Ware, Press.

This is a good post and I would say this, and yesterday's post (with it's hidden content??) is a refreshing read on here...further, I wouldn't think you'd be so conservative as to what constitutes appropriate content for an ART blog- especially one with the subheading of "Social Sculpture". To me that question mark begs that your blog be something other than simply lists and reviews (which it is) and I think it implies a blog that is expansive, not exclusive in content. In fact, one of my favorite posts that you've written (that wasn't about my work!!) was about the death of your sister's dog. I'm not looking back and finding it, but I remember you writing that your "beautiful sister's" dog had died. I thought that was perfect and so perfect under the banner of "Social Sculpture?".

Write on Martin. I say that the reason we read is because we want to know what you think about what you've experienced.

hi michael - thanks, but i do want to keep this blog more of a niche thing.

sometimes things slip in, or there is overlap..

here is the post on mason. it is pretty much just his photograph... he was the sweetest dog ever!

It's your blog, Martin, it will always be niche. The pathways of life become richer not for staying in one place too long.

Post what ya like. The only bad posts I've seen on the internet were wantonly preachy or political. A couple objective meanders into personal biographies make for an interesting touch at times. Dowhatchalike.