.
Guy Ben-Ner at Mass MoCA. Eight films played large in eight spaces. It takes about an hour and forty-five minutes to watch them all (each is 10 to 20 minutes)... WORTH IT!

Thompson pilots a plane which crashes, then they get in a car - without putting on their seatbelts, Thompson driving - which crashes, then they get on a tandem bicycle with Thompson doing all the pedaling... until they arrive at a dead end sign at an empty dirt field. The borrowed literature conversation is friendly banter on issues of commitment, compromise, inevitability, purpose, mid-life crisis, and (divorce) contracts.

GET IT??- Christoph Buchel vs Mass MoCA 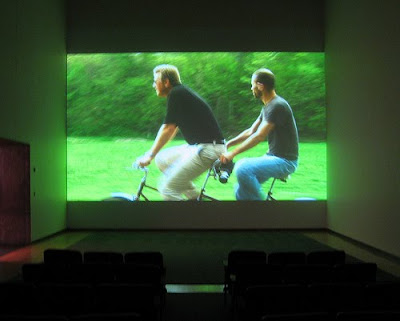 Guy Ben-Ner and Joe Thompson on a bicycle built for two, with Thompson doing all the pedaling.

JT: Start pedaling
GBN: It's too late for that.
JT: You can say that again

Don't want to mislead anyone into thinking this piece is only an elaborately sly Buchel piss-take... it's more... I'm just sharing a layer which most people would never catch on to. When they get to the dead-end field one of them says "no circus here", and the seating is even recycled from the abandoned Buchel theater.

PLUS1: Mass MoCA has five other shows happening concurrently, including the must-see Sol Lewitt building.
PLUS2: Still waiting for the written decision on Christoph Buchel's appeal.
Posted by Martin at 12:20 AM

Did you see RS article on the Bruce HQ Foundation?

I was just at the Ikea in Redhook - lots of nesting going on there, great place to meet a chick or take a date and get a 2 dollar meal (2 hot dogs, chips and drink) and decide if you want the melamine faced fiberboard bookshelf or if you are going to be renting for more than a year and want the industrial metal wall mounted shelving unit.
There are worse things than becoming a slave to the Ikea nesting instinct.

I also read that Ikea is ditching Futura in favor of Verdana, which is right on in my book. Join the club!

i was talking to a friend about this show and she had never heard of ikea.

i was shocked... but she is young (22) and has never lived outside of upstate ny. weird though the things we take for granted everybody to be familiar with.

thats why the kids move to the city! Or travel, maybe to Europe because in China they eat rat and dog and bugs. Italy, for example is a great palce that has food you may already be familiar with, like spaghetti. I havent been, but I hear pizza is nothing liek the pizza in america.

Ok but MassMoca is harder for me to get to than France as Far as I'm concerned.