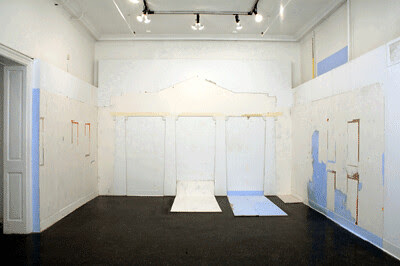 The stated ambition of Surface Charge, co-curated by Sabine Russ and Gregory Volk, and on view at the Anderson Gallery through December 4th, is to turn the "very surfaces into active forces as opposed to neutral supports". The exhibition brochure shares that much of the work was made on-site, specifically for this exhibition, and "will exist only for the duration of the exhibition".

The best works in the show are the ones that come closest to meeting these ambitions. The less fulfilling pieces - the Karin Sander, the Ragna Robertsdottir, the Maix Mayer, the Katrin Sigurdardottir, and, to an extent, the Lawrence Weiner - are the imported ones that have been shown before and will be shown again elsewhere. Pieces like the Sander and Robertsdottir may not exist, per se, when not being exhibited - but these trademark wall-pieces are most certainly imported works.

Lisa Sigal - Lisa Sigal's piece, pictured above, is called White House, and is one of the few pieces in the show that fully meets the curator's stated aims of transforming or charging the walls so that the space itself become the work of art. It is a beautiful and understated piece, very cool to stand there within the chalky crumbling classical ruin of a stage-set White House. The piece is full of subtle blue and yellow charm points extending all the way to the ceiling. The short statement about her work below is perfectly accurate -

"My paintings on canvas, walls, and recycled sheet rock explore artifice and the possibility of physical entry to the picture plane and offer a momentary bridge between the unequal worlds of the imaginary and the real."

Odili Donald Odita - He has designed two murals, one on either side of the room. They're nice, one consists of warm earthy colors and zig-zaggy patterns and looks good with the arched doorway at it's center. The other is two wall-wide bands of bars of powdery black paint on a white wall, all oppy if you get close.

The room definitely has an African feel, something that I would get without knowledge of the artist's name, and being in this room does somehow feel like being in an another place; like there might be palm trees outside. I think this might be the piece in the show that, with the centrality and associations of the arched doorway, makes best use of the building's existing architecture.

Karin Sander - Sander is represented by a small example of one of her trademark wall-polishings, which was a letdown. If the idea of some of these pieces is their ephemerality, that the work will exist only here and never be seen again, isn't that defeated by the artist's willingness to schlep the same schtick whenever and wherever she's called to do so?

Excerpts from an interview with Karin Sander -

"My work is perhaps best characterised by the fact that when I start out, when I first confront an exhibition situation or a problem, I have no idea what kind of work will emerge at the end."

Sorry Karin, this wall-polishing is EXACTLY what I was expecting, if not less so.

"in each case the next step is not defined for me in advance, so that the works that emerge are always very different from each other. They may have a lot to do with the works that have gone before, but it’s quite different from, for example, going into a studio where I know I will find paints and a canvas – in other words where I will at least know where to start."

I found the placement, on a very narrow wall between the entrance and the reception desk, to be distracting. The big thrill of a Sander wall-polishing is just staring at it and getting that disorienting op effect of it disappearing or the wall disappearing, or the piece becoming one with the wall - but it wasn't so easy to focus on it here. Too much peripheral vision stuff.

Did she actually come or was it done by someone else?

Ragna Robertsdottir - It's LAVA, get it? It is charged! She is from Iceland. It is a volcano. It is LAVA, do you hear me? Get it?? It is glued to the wall!

Actually, this was more interesting to look at than the Sander because it is so big. It's fun-ish to get close and look at it from an angle, it can look like throbbing magnetic fillings or hair, and to step back and try to see patterns and swirls. You start to see them, and wonder if they were intentional or not. Good place to sway back and forth and practice your transcendental meditation.

Opposite the wall of lava(!), called Lava Landscape, she glued a much smaller square of crushed glass, called Glacier. This has confused me because the one piece, Lava Landscape, is actually made from the stuff it represents and the other, Glacier, is not. What does that mean? Anything? I'm afraid not.

It bores me even more to know that this, like the Sander polishings, is something that just keeps getting reproduced in different places. I resent the ooh-aah promotion as one-time-only! site-specific! transformative! non-products when they are, in fact, no different from any other painting or sculpture that can be delivered and sold.

I think the question that begs to be asked is "How unique is an Art that is obviously anything but unique?" It's not even so bad that it's just another painting that can be bought and sold, it's bad because it's the same painting over and over again. This might've worked in the early 20th century for people like Harry Houdini who could perform the same stunts in different cities and audiences, but at least a traveling circus knows the limitations of its gimmicks.

I had a really positive response about the show, I thought it was really good, but at no point was I expecting the specific works you mentioned to be necessarily new or unique. I think Sol Lewitt tried to sell that, decades ago, and apparently someone's still willing to buy into it. "Oh, look at what can be done with cubes..." we all said.

I think the overall feeling I had was that I was really glad that such a high-profile type show was being put-together in "such a small-town art environment like" Richmond. The downside of it is that there's a fair amount of showmanship and the sense of being contrived. Hell, you could argue that it was the finest example of Art-World take-out we've ever seen.

Would Karen Sander dare explore new work in such a "remote and isolated" place like Richmond, Virginia? How much can we expect hi-profile innovation in a market so far removed from Chelsea and L.A.? These are tough questions for the artists involved... Even if they woke up and said "Eh, it's Richmond... I think I'll throw that old rag up on the wall..." it goes without saying that much of the Richmond cultural elite would stand behind the curators and feel inclined to say "Yes, yes, we love old rags! Thank you, thank you, it's so great!"

I suppose we could be upset about the art "table scraps" that we're getting here in the capital of the South, but remember that it could always be worse: we could be in Carolina...

It bores me even more to know that this, like the Sander polishings, is something that just keeps getting reproduced in different places. I resent the ooh-aah promotion as one-time-only! site-specific! transformative! non-products when they are, in fact, no different from any other painting or sculpture that can be delivered and sold.

I'm not commenting on the specific artists involved here, as I don't know their work, won't see the show, etc. But as to your general point: yeah, that's one of the most tired things going. The ostentatious denial of commodification, followed by . . . commodification. So, so tired of it.

I'm reminded of that show VH-1 used to do, "Behind the Music." I have a memory of an ad they ran for one episode on the Sex Pistols (or perhaps just Johnny Rotten, or something.) Anyway, there was the Sex Pistols/Public Image LTD frontman, firmly saying to the camera something like (I'm going from memory), "If you don't want to be a pop star, then stop. It's the easiest thing in the world." I think of that when considering work that gets into the whole "commodity" thing.