I've finally scanned the other prints I got when I bought the Lester Van Winkle piece at Diversity Thrift. I've never heard of Rebecca Winston, the artist, but when I saw these little paper pieces crammed into a rack with a bunch of other stuff I had to save them, especially when I saw that some were signed and dated 1964. How have these little unframed things survived so long, uncared for?

These are the three that I bought. The biggest one here is the nativity scene, only about nine by eleven inches, the other two are postcard-sized. All three were priced at five dollars each, but because the bigger one is signed, titled, and dated while the other two are only initialed I was able to talk him down a buck on each. 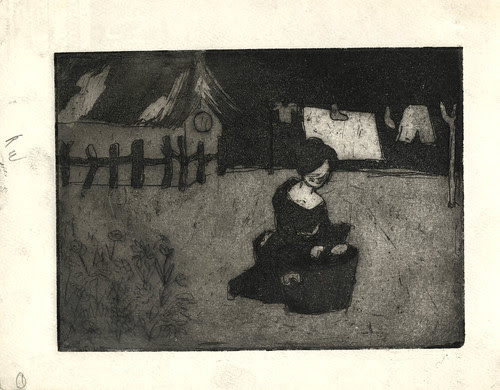 I think this one is my favorite. It has a sad fairy-taleness, and you can't quite tell what she is doing. Washing clothes, or drowning a baby? She looks so sad, like something has happened to ruin the fairy-tale. All of these pieces feature a woman sitting or kneeling over a baby or possible baby. 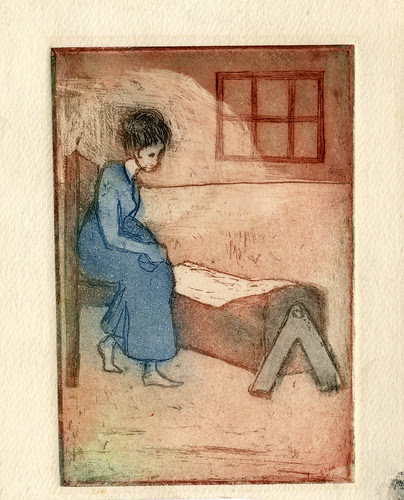 This image is the smallest, probably about actual size on your computer. I see a lady but I don't see the baby. Is the crib empty? 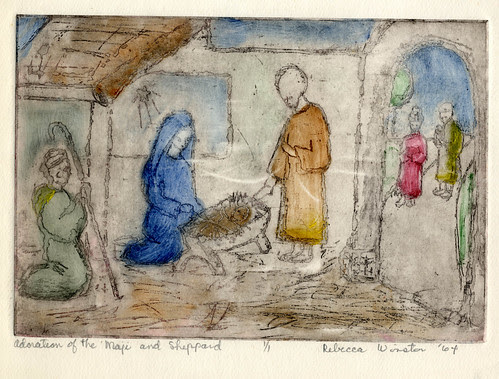 The nativity pieces were the only ones that were signed. This is something that fits into her theme, but that she may also have had hopes of selling. There were more of these same nativity prints available, all hand-colored differently, all signed, dated, and titled.
Posted by Martin at 10:40 PM