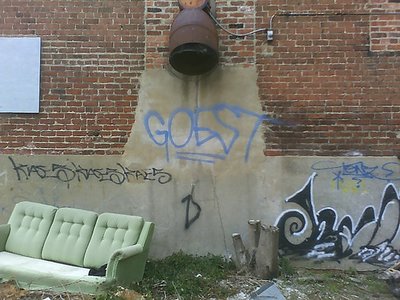 This guy/guys tags EVERYWHERE. I've seen his tags in really odd places around town. One was on the back of a paper towel dispenser in a restroom that you could only see if you were standing up peeing and looking in the mirror.

I love Day by Day videos. I was an avid fan of Punchline and Chew On This magazines. I would have to say that my favorite graff artist/writer would be Expert. The fact that his tag still lingers in hard-to-reach places from more than 10 years ago is testament to what I believe he stood for. I mean, if the municipality isn't even willing to dare to reach it to clean it off in all this time, then it must say something for this man's bravado. I'm proud to see him linger. I still enjoy driving past a few choice stoplights and catching glimpses at Refuse posters several stories in the air. As much as I hated reading "Dirty Ol' South" sprayed on the rooftop of the old Central Bank building, I can't help but still marvel at the prowess of the individual(s), still unknown and at large, who completed the task in a single night. Their attempts were daring and in-your-face, they took risks not only against the forces of law but against the forces of physics as well. We all love a daredevil.

The sad thing is that it seems to me that every year or so I'm now hearing about the latest arrest of another one of these kids who's trying to be the next Samo or something; I even have a direct quote lifted from Basquiat that's been written no more than 100 feet from my house. The sad thing is that every year the names are more and more recognizable and people I've become closer and closer to. Unless you accept the argument that this is some sort of testing ground, can we all agree that it might not be working?

I don't fully yet understand graffiti but I understand and respect artists, those people who seem to be largely responsible for it. I also understand law enforcement. For every day that I decide to let an artist be an artist, another 24 hours has passed that a team of law-enforcement officials might or might not have gotten clues that gets them closer to breaking a case. With Refuse, it was as simple as tracing a bar-code. With others, they had the misfortune of being caught in the act.

It's hard to try to see both sides and come to any firm conclusions. I've got friends who'll never care enough to stop, who know that their lives won't necessarily be ruined and are willing to take their chances on the street. I also have friends who have put down the spray-can and strongly encourage their friends to do the same, fearing that any interruption in the plans they've layed down would risk a future already within their grasp. And still, those that have been caught in the past continue to leave fresh paint and paper on the city walls as if the experience had only crystallized in them who they thought they were, perhaps caught up in the romance of the rogue against the state. Some, even after having amassed a written record of "violations" that exceed $60,000 in retribution, still firmly believe in the sport. In seeing all of this, I'm very reluctant to ever admit any right or wrong in the issue and resign to leave it to a matter of personal choice. But that seems to be when it hurts most.

The part when it really gets personal is when I see an artist intersecting with a community and the result is an error. An artist myself, I believe that many forms of wanton self-expression are worthy of extensive defense and rationalization in the face of community resentment, but the cost to personal property greatly complicates the issue and turns it on its head for me. Ignoring this latter aspect of the argument, we're still faced with communities who feel that abandoned buildings themselves pose lesser threats to our sense of security than the random scribblings, tags, and musings that adorn them. In that, simplest, regard, we still are faced with the dilemma of artist vs. society. It must be noted that Society, while not always the most admirable of opponents, is very adept at winning, and this competance must be carefully acknowledged and calculated by the wise.

But can't we have graff art that, at the very least appears to transcend mere territorial pissings? This is how Society sees graffiti, and most graff artists such as Goest and Goner sadly do little to challenge this view despite whatever intentions they may have.

Far be it from me to solicit notions of Kinkaidian landscapes adorning the crumbling walls of abandoned buildings, and far be it from me to believe that artistic expression should, necessarily, be limited by or restricted to the needs of the community and be held up to notions of what is and what is not acceptable in their eyes. This is, ifnot censorship, appeasement. But still, in spite of all of this, I oftentimes have an intensely difficult time making sense of the current status quo of irrelevant logo-making, brand-recognition, and immersion tactics employed by these artists; actions that are presumably done under the auspices of participating in a rebellion against corporate mass-advertising forces, but instead, appear to doom themselves to imitating them. This is a big argument, and forgive me if I seem clumsy.

As someone who's seen the true compositions of people who've been arrested, as well as those still unknown, I cannot help but come to the conclusion that their voice is better served on the canvas. But graff is what they do. These external explorations do more than just drive their formal content. But still, this martyrdom is a joke. This is the end-sum of heartbreak.

We all do what we have to do for recognition, but in this city I've failed to see it work, and fail to see how there's enough of a sustainable ..anything... to even attempt to make it work. (One or two choice magazine articles and some newspaper headlines, but does it go further?) I admit that it happens in DC, and history has shown that it happens, as anything can happen, in NYC. But as far as Richmond is concerned, is it really working, or is this just an attempt at teaching a pig to sing? When the consequences of bravado in the state of Virginia can get in the way of higher education or land you in jail, I think these are questions we should be asking... In this battle that the artists are waging, I fear our warriors are in a savage land that's over 600 miles from any decent hope of salvation.

I think It's worth noting that Jean-Michel Basquiat and Keith Haring weren't saved by a daring and sympathetic art community that upheld artistic ideals in the face of common law, they were saved by buyers and gallery owners who were willing to take risks because they had the financial backing and the appropriate investment forces to believe-in, promote, and profit from what they were doing. Those things don't exist in this town, not even for the good artists, and re-treading the well-worn ground of big-name, big-town artists does little to set us apart. We need a new story.

We need a new public art.

I am a practicing artist who is very in debt from school and working as hard as I can to make art and get by. Then I come home to find the house my partner are trying so hard to pay off, fix up, etc tagged with some illegible, meaningless jumble and I just feel like someone punched me in the face. So many tags not on municipal buildings but on my neighbors houses and the apartment around me. Graffiti art was complicated, inventive, changing all the time, mostly in public spaces and was new and edgy 25 years ago. These tags not graffiti art. If you argue they are conceptual art what is the concept? Destroying another artist’s home? Tagging is a mean and tired cliché in the guise of art.

i am generally okay with graffiti on abandoned and neglected properties, hidden in allies, but graffiti in/on places that creates distress is absolutely wrong.

i have no conceptual argument in support of graffiti, most of what i like is for formal reasons, and an emotional response.

aaah Goest ,he mey be a toy now but he's getting up pretty damn good. And to tell most of the people who don't know. You mean graffiti BOMBER or Tagger. A graffiti ARTIST uses graffiti to make acuall art. As in murals and such ,take dondi's work for example (not saying he's an artist I honeslty don't know). I just wish the graff scene in chester was live I'm practicly the only one that writes in chester besides Dem1 and he only bombs, And the rediculous anarchist international Wtf?).