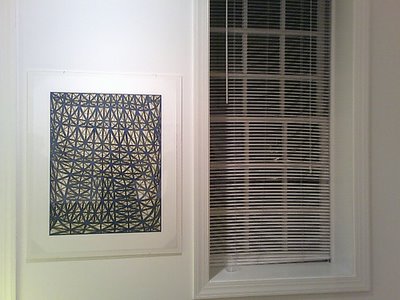 This reminds me of the Rudolf Stingel that was in Curator of Last Year's About Painting show. That was a a silvery painting hung in a hall between a door and a window, the silver-grey windowshade almost the exact texture of the painting.

The old Tang site had the entire show on-line, but it seems to be gone now. The only thing I can find is this little blurb (scroll down) by David Brickman for the Albany-based Metroland -

"With 67 artists in one exhibition, there are so many permutations as to defy drawing any real conclusions. Perhaps that’s the point of Tang curator Ian Berry’s overwhelming cornucopia of styles and personalities presented under the vaguely bombastic title About Painting (a smaller selection also on view in the museum titled About Sculpture is far more comprehensible, even if by design less comprehensive).

Two things, however, are abundantly clear: Berry loves paintings; and there is no shortage of artists out there who love to make them. What struck me as particularly odd is that, apparently, more than half of those painters worthy of consideration just happen to live in Brooklyn. An absurd instance of an all-too-prevailing attitude in the art world.

In fact, great paintings are probably made every day in just about every country and state. Here, there are 71 pieces, of which only a few could accurately be called great. I’ll leave it up to you (as does Berry) to contemplate the show and then decide which ones those might be. It’s a good bet you’ll enjoy the process."

That last part is true because as we saw this show we made marks next to each artist's name signifying our responses to the work; a circle by the favorites, an X by the unliked ones, and a wavy line by the okays and undecideds. We did enjoy the process, and happened to run into Ian, whom I think enjoyed looking at our marks. I forget who now, but there was one artist we had X'd of whom Ian said "you're wrong about that one" - so we went back and re-evaluated. It was interesting that he didn't say we were wrong about the other X'd ones.

BONUS: my David Brickman review!!
Posted by Martin at 10:00 PM