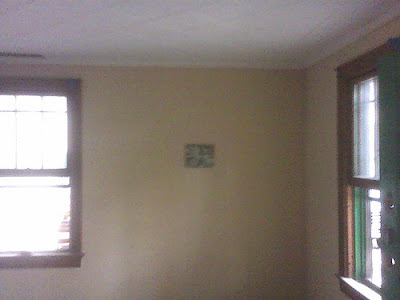 Painting on a wall, inside a house, Western Massachusetts.

The Christoph Buchel exhibition will open at Mass Moca, kind of.... without being "done", and without the artist's permission... unless, it is all a joke and exactly what he intended.

My impression, and I saw "the show", is that Buchel was overwhelmed by the huge space - unable to finish on-time and within budget - while trying to maintain his demanding character at the same time - and just couldn't deal.... so he abandoned it until safely back home in Switzerland, where he perhaps began to embrace the new nature of the piece.

Really, this works out better for him, because even with ALL of the stuff they put in there (a movie theatre, mobile homes, many vehicles and cinderblock walls and shipping containers, a HOUSE) it still looks all spread-out and very much like you are in a single gigantic room, not the disorienting gosh-am-i-still-at-an-art-show? effect that he is able to get in a more manageable space. The museum putting up a maze of tarps and opening the space without permission is doing him a favor... more notoriety for him, and it will actually look better. 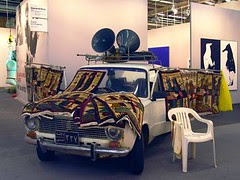 This is more Buchel's speed... a Swiss art fair. Hey, it looks like this dealer must have had a similar problem with Buchel, and they had to cover his piece with rugs.

Man, I pretty much ALWAYS side with the artist, and hate curators claiming artistic liscence... but I have to hand it to Joe Thompson and Mass Moca for one-upping Buchel at his own "subverting the relationship" game.

UPDATE: CONTINUE READING THE BUCHEL SAGA HERE - a visit to see the tarp show.
Posted by Martin at 5:00 AM