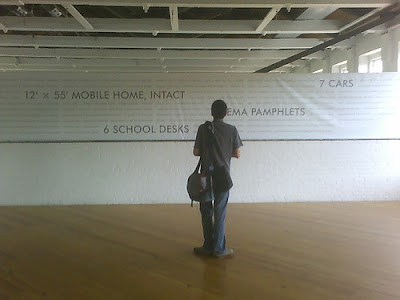 This is the reporter from Switzerland.

I went BACK to Mass Moca yesterday, because I am obsessed with the Buchel story and trying to figure out what the deal is.

The tarps are up.... not just tarps, but also large pieces of burlap - smells good. I was wondering if they would be up or if the court decision had come through and maybe they would be down. I didn't take any photos in the tarp alley... you can see some photos on-line in the newspaper articles.

Okay, you first walk in through the old movie house... it is all burlaped up... then into the main space starting in a burlap cul-de-sack becoming a mostly tarp corridor. They have been pretty good at closing all the seams, not many peek-through chances, but you can of course see the tops of things, and some large shapes through the burlap. The space has been very much cleaned up... it really isn't like a Buchel installation at all; the floor is swept clean, no detritus at all.

At the end you enter a closed gallery space containing Made at Mass Moca, photos and text documenting the previous shows that occupied the Building 5 space; Robert Rauschenburg, Tim Hawkinson, Ann Hamilton, Robert Wilson, Cai Guo Qiang, Carsten Holler. A Mass Moca staff person was talking to a reporter from Switzerland in here.... he had come all the way because of this Buchel controversy.

The second floor of this end gallery space is also open.... it is a large loft-like space which overlooks the main (Buchel) space, and is completely open except for a single table and two chairs. One wall has a long bulletin-board of Buchel/massMoca press clippings, and the opposite side - which would normally overlook the Buchel installation space - is blocked by a long banner which lists all of the materials gathered for the Christoph Buchel installation. The Swiss reporter, in the photo posted above, is studying that banner. 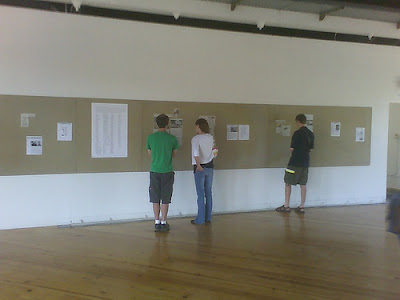 Modern Kicks - post one, post two, post three, post four - lots of comments.
Edward Winkleman - near the end of the comments artist Lisa Ruyter and Ed get in a little fight. Lisa says about Buchel - "I, for one, am attracted by the stand and risks he is taking" - which sounds ridiculous. The budget for the project doubled, and the artist still insists "the installation remains 50% completed". What is his stand? I refuse to take any responsibility for my flops? Good one.
Art Law Blog - this is Buchel's lawyer - and he is posting letters to Mass Moca and e-mail correspondence. 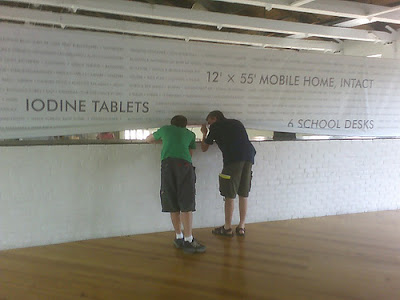 Peeking down at the canceled show.

I was a bit suspicious when I saw how "done" the Made at Mass Moca show is - lots of nice signage and banners - and how convenient it is that this end space was available... but I talked with the Mass Moca person while she was speaking to the Swiss reporter, asking about when exactly they started to put this show together and what the previous plans for the space were. She said it was all done QUICK, very last minute... and they all impressed themselves with how fast they were able to get it together. Also that the (first floor) back space was originally going to be part of Buchel's installation, and they just cleared all of the Buchel stuff out.

I'm still thinking that Buchel is an absolute perfectionist who was overwhelmed by the space and flaked out rather than open a less-than stunning show... not that this is something that was planned from the start... and that Mass Moca is trying to make the best of a very bad situation.

I haven't posted on these other shows yet, but there's a lot more to see at Mass Moca then the Buchel-that-is-not-a-Buchel (or is it?)... I've visited Mass Moca FOUR times in the last two months, today to see Spencer Finch and what was happening with Buchel, but the two previous visits were to see The Believers and Erik Lieshout. On that last visit I was able to watch Spencer Finch (by himself) installing his big show.

Point being, there is a LOT to see at Mass Moca... the large group show The Believers, a solo show for Erik Lieshout, a large Spencer Finch retrospective, and of course whatever the courts will allow anyone to see from the abandoned Buchel project. Oh, and Made at Mass Moca, the last-minute show made in the gallery space at the end of the Buchel tarp-maze.

Note that I say I was able to watch Spencer Finch installing his exhibition. That is normal for Mass Moca, many galleries are always on view... it is not unusual to see work-in-progress at Mass Moca. To get to The Believers and Lieshout it was necessary to walk through parts of the Finch space, and once upstairs there are a couple different balcony areas from which we watched Spencer Finch on top of a stepladder hanging pieces of crumpled cellophane (or something).
Posted by Martin at 6:00 AM

I've been reading your blog for some time now, and I just want to say that it's quickly become a favorite of mine. Regarding the Buchel kerfuffle: I've been following it for awhile now, and I've come to the conclusion that perhaps his intent all along was to have a "non-show show" at MassMOCA. It seems like something he would do--create a lot of hype, pull a supposed "freakout" at the last minute, force the folks at MassMOCA to cleverly conceal everything, post some newspaper clippings about the whole thing and voila, you have a VERY tongue-in-cheek and subversive show. In any event, it's pretty clear to me that Buchel did indeed manipulate the powers-that-be in the press and MassMOCA to get something out of it, even if it was just some more exposure.

Btw, I totally agree that it was LAME for MassMOCA not to include any blog post printouts.

if that is the case, this will be hard to top. he might need to consider retiring, maybe dedicate his life to chess or something.