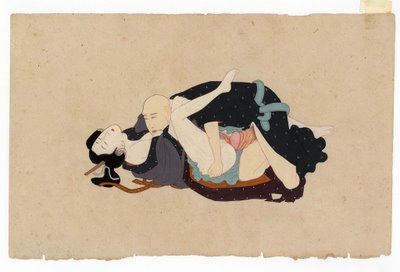 It was given to me maybe fourteen years ago (or so) by a girlfriend in Philadelphia, before I had any idea I would end up spending so much time in Japan. I think she got it very cheap someplace, and just thought I would like it. I had always assumed it was a print also, and never looked at it closely until after I'd spent a number of years in Japan and became more familiar with the art and culture.

I took a washi papermaking workshop, learned about the screens and all that stuff, and so a few years after that on a trip back to the States pulled out my old shunga to take a closer look at the paper. This was probably the first time I ever took this thing out of it's archival matting, although I had never even had it framed, and when I held it up to the light and looked at it from the back I was very surprised to discover that it wasn't a print, but a painting. You can see all the brushstrokes (the paper is very thin). That really blew me away because this thing is FINE. Those hairs and eyebrows and eyes and everything are extremely fine. Here it is at about life-size, look at the features. Now, here it is much larger.

Look at those eyes and eyebrows! Look at her hairline. You can even see a couple hairs on her nipple, some underdrawing, and places where the artist made corrections. It is incredible.

I took it to the museum a couple years ago and was told that those notches along the bottom mean it came from an album, a book of pictures, but that person was not able to identify who the artist might have been. There are no markings, signs, or seals on the piece.

Does anybody know anything? The museum curator I met with was not enough of an expert on ukiyo-e to tell me much more than I already thought, and museum policy forbids appraisals. I would like to show this to a real EXPERT, and also find out how much it might be worth.
Posted by Martin at 9:45 PM

I remember so vividly when you were given that piece, I was so impressed with it at the time, even though we all thought it was a print. You showed Steve Sheldon and me at your apartment on 16th and Spruce. Now I'm even more impressed.

What a treasure Martin! I'm envious. Maybe these people can help you.

The Asian Art Museum, in SF, holds a monthly art appraisal, but you have to show up in person with the artwork. They also have list of Asian art appraisers on their web site - I think these folks would be your best bet:

thanks beq and anna, i've contacted both places, maybe i'll hear back from someone.