Haigh Jamgochian and his Markel Building 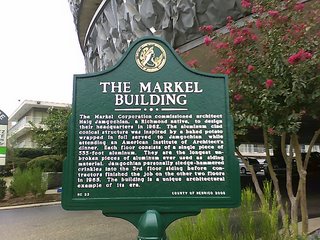 Here is the new sign outside Haigh Jamgochian's Markel Building.

"The Markel Corporation commissioned architect Haig Jamgochian, a Richmond native, to design their headquarters in 1962. The aluminum clad conical structure was inspired by a baked potato wrapped in foil served to Jamgochian while attending an American Institute of Architect's dinner. Each floor consists of a single piece of 555-foot aluminum. They are the longest unbroken pieces of aluminum ever used as siding material. Jamgochian personally sledge-hammered crinkles into the 3rd floor siding before contractors finished the job on the other two floors in 1965. The building is a unique architectural example of its era."

(uh oh, did they spell his first name wrong? every other thing i have read spells it "haigh")

Jamgochian's original plan for the site was larger; six mushroom pods under a circular frame made of masonry and glass. One of the two newspaper articles linked to below states that "the site was built over a creek, so mushrooms naturally came to mind, he said. His inspiration for the one pod office came at a dinner -- a foil-wrapped baked potato". I think that the original, larger plan came in within the budget, but they then asked what he could do for half that much; I guess they were really impressed with how much he could do within the budget?

Each floor of Jamgochian's Markel Building is wrapped in a single 555-feet piece of aluminum. 555 feet because that is the height of the Washington Monument. Jamgochian used a sledgehammer to hammer all the dents into the third floor band himself, in only four hours. The whole building is covered in metal patches and duct tape today, which makes it look even better, somehow. Click on that top photo to see it larger and you can see some of the patching.

Richmond was the headquarters of Reynolds Metals (Reynolds Wrap), so aluminum was a natural choice; the former Reynolds headquarters building, designed by Gordon Bunshaft, is now the worldwide headquarters of Philip Morris, and that building too is made almost entirely of aluminum, including the threads in the carpeting. Wow!

READ THIS ARTICLE on Haigh Jamgochian... he is so interesting. He's been a locksmith, a teacher, a plumber, and was a yoga teacher long before yoga was fashionable. Jamgochian is still alive, maybe eighty-two or so, and spends most of his time and energy re-arranging his land.... moving rocks and logs around.. making some kind of paradise garden. The first time I heard of him was on a tv news profile a few years ago, it was good, he was so exuberant. I'd like to see that again.

I can't believe I am having a show in the Markel Building!!!

Vincent Brooks, senior archivist for architectural records with the Library of Virginia, has collected all of Jamgochian's papers and models, and is planning an exhibit for next year, I think. Can we go and look at the models and things? I want to see them.

THANK YOU to Pettus LeCompte, current owner of the building, and to Mike Pittman and Joe Throckmorton, for helping me get my work up.
Posted by Martin at 12:20 AM

Haig and Haigh are interchangeable, Haig/h is an Armenian name and we have a different alphabet. Very nice blog.
-Nevdon (no relation) Jamgochian

I had the pleasure of meeting "Mr Jam" several years ago. He is one of the most interesting people I have ever met. The enthusiasm with which he approaches life defys his age. He took me on a tour of his Rockfalls property, explaining his vision for the place. If he is ever able to complete it, it will be amazing. The fact that so few of his designs were ever built is a loss for the world we live in.
Ben Sherr

ben do you have any pictures?

I'm a Haigh from Kingston Upon Hull East Yorkshire and I have only recently started studying my family Surname, I have never heard of or seen Haigh Jamgochian or his works before but if he is anything like my father was then yes I agree with you all he must be a very resourceful man, My brother Goordon Haigh & his Son Gentleman Joel Haigh can be seen on Youtube meeting Amir Khan in Los Angeles and boxing as My brother is Head coach of Hull Saints boxing club, he appeared on Noel Edmonds Christmas presents a few years ago and is the caretaker for our local school in Hull, their is a village called Haigh in West Yorkshire with a great Hall called Haigh Hall from a 12th century Knight who bought land from the King of England, Haig's or Haigh's fought alongside Sir William Wallace at Stirling Bridge and alongside Robert The Bruce at Bannockburn and at Aycrum Moor and at Hasildon Hill and at Waterloo and was with the confederacy at Point Blank, I do not know if the surname Haigh is Armenian but if you look on the internet in Lewis Scotland their is a Dun Charlabhaigh Broch which is perhaps the best preserved Broch in the Western Isles - and clearly shows the inner and outer walls. It was built about 100-300BC Before Christ and reaches some 10 metres (35 feet) high. The Viking name for Haigh is Hagi it means from the hedge or edge, their is also a Charlabhaigh Loch alongside of Dun Charlabhaigh Broch which I beleive was what Charlab sailed down in and then called it after himself Charlabhaigh Loch Charlab from the edge meaning Charlab from the waters edge which separates land and Sea. Haigh obviously could mean from the grass edge but don't you think it makes more sense that their was a person named Charlab who sailed into one of the Scottish Loch's and named it after himself, their have been Vikings in Stonoway isle of Lewis in Scotland and both Dun Charlabhaigh Broch & Loch Charlabhaigh are alongside of each other, the vikings moved inland and the name Haigh also moved inland with them, from Scotland to Wales can be seen Haigh's and I have seen Haigh's in America, Australia, New Zealand & Africa on the internet and the Vikings are famous for moving around and not settling in just one place, I'm Sean Haigh.