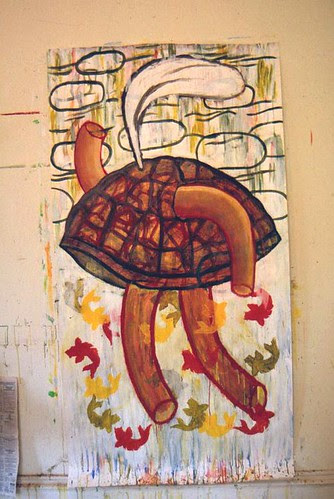 almost all of that work is rolled up and sitting in a storage locker in Hoosick, NY... (assuming somebody is paying that bill!).

Wasp's Nest - mostly paper collage - there used to be branches, but i painted over them (not after, at the time).

click the highlighted and italicized titles to see the pieces a bit bigger.

Beaver Lodge - this beaver has a paintbrush in his mouth. his fur is glittery. the beaver lodge is the taj mahal of beaver lodges.

i think there is a photo of me making this; i will look for it.

Ladder - i used to take home all the packing paper that came with the books sent to us at Borders, this is before they started using styrofoam peanuts or whatever. sometimes the paper was colored.. so you see that grey-blue, and all the yellows and browns. the pink paper came in with the postcards. taking colored paper home from work was cheaper than buying paint. the silver and gold apples and stars are most likely made from foil from candy bars.

all of these use that edging from computer print-outs, the dot matrix stuff, i don't know what it is called. Laurie handled all the accounts at Borders and used to pull it all off and save it for me, it would be yellow or white, sometimes pink. it is used in the wasp nest, the beaver lodge, the ladder. you can still see a lot of it used all the way up to these 2003 paintings, but it looks like maybe the last time i used that paper was in this 2004 piece, where it was thrown on in clumps. 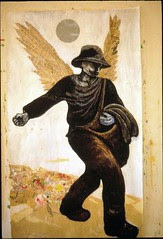 The Sower - this is maybe the last one i made before leaving Philadelphia for Albuquerque, so it is from early 1994. his wings are made of newspaper feathers. the moon is the silver disc that came with my microwaveable pizza-for-one.

Martin, Why the title for this post? Are you thinking about Arvo Pärt?

hi VC - "Make Haste Slowly" is the title of the first painting posted, and that came from (for me)the Medici motto Festina Lente... and i had read that one of their emblems was a turtle with a sail.

it was a message to myself at the time.

posting it now i may have been thinking about the Saltz lecture, the 30-month and thirty-year career thing, and having just seen the High Times, Hard Times show at the Weatherspoon on Friday. most of the work in that show is from thirty to thirty-five years ago.

I used to have "Make Haste Slowly" written somewhere on my wall. It seemed to be a beautiful goal for a painter.

I need to add your blog to my links.