i knocked on his door 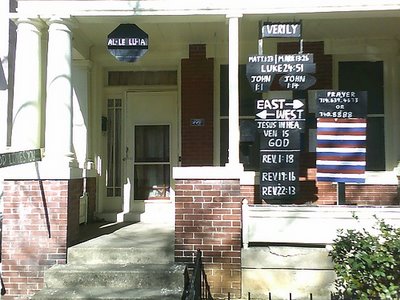 I knocked on his door.

Well... first I called two phone numbers on the signs and got prayer lines that didn't know who he was or what I was talking about... then I called the number looking for the sign stealer and let it ring about twenty times and nobody answered... THEN I went up and banged on his door for a while, but nobody came... then I wrote a note and put it in his mailbox... then finally as I was leaving he answered the door.

I was hoping to put one or two of his signs in a show I am organizing, but he isn't interested. He's a little bit interested, or maybe curious, but not enough to take any of them down, and says he doesn't have anything extra inside. His main concern is catching the sign stealer, and making sure I am not the sign stealer. The current sign stealer... as people have been taking them, intermittently, for forty years.

Once he was convinced that I am not the sign stealer, he went back inside to get a warmer shirt on and came out on the porch to hang out and talk. He said he has a hobby... he can guess anybody's age, height, and weight, within three years, an inch and a half, and five pounds. He was off by eight years and two inches, but claimed he got two out of three right because he backtracked and said height within two inches.

After that it was all about Jesus and The End of the World. It was funny because he would be preaching and then segue into something real-world, like sports or catching the sign stealer... "He is an angry and jealous God, and I'm gonna get that sign stealer". It really bothers him that someone would take them. 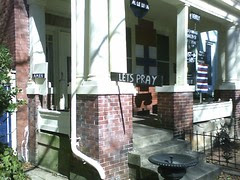 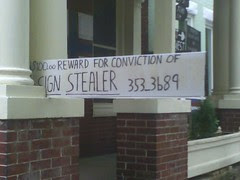 Martin:
I have not been in richmond for a while - but this is the house on Floyd right? something like the 2200 block?

I amazed you approached him - I was always too scared. In previous years he had "bowl" and "Potato" on the porch - am I thinking of the same guy?

matt - yes, that area of floyd. what do you mean bowl and potato? signs that said that?

Martin:
When I lived on Floyd - there was a house about a block down (I was on Floyd and Stawberry so it was 1 but noot more than two blocks down the street) I ssem the think it was a red brick porch with a sign that had a cut out of a potato and a bowl - each were labeled as such.

Every once in a while something else would go up, but the bowl and potato were always there. This was up all through the 80's and I saw it as late as 1999 - I haven't had a chance to look for it since.

It's probably gone, but I thought I'd ask.

Martin-
Thanks for knocking on this door! For 20 years, I've been wondering about the person who lives in this house!