Kusama Yayoi, Self Obliteration, 1967 - So many wonderful and mysterious things happening in this video. She starts off covering a horse and herself with white paper circles, she is wearing a red gown and has long black hair... they are both covered with the white circles and she is riding slowly around. The video is old, it has an old home movie quality, but slow.. she brings the horse to a pond to drink, there are white circles floating on the water.

She walks into the reedy black pond, her white robe is spread out and floating.. she's putting the circles on the water.. then she is standing in the water, above her waist, in front of a floating canvas and painting red circles onto that. It is all very quiet.

There is much more, it's GREAT.

Mary Heilmann has two pieces in the show. The Book of Night, 1970 is made of black cloth, with jaggedy holes cut in each page, through which you can see silver paint on pages below, like stars. Her other piece, Ties in My Closet, is a painting from 1972 that I liked better without knowing the title. The "ties" are all collaged fabric, but it looks like paint until you get close.

It's interesting to learn that she started painting sort of as an act of contradiction... that she didn't get along with painters, basically thought painting was dead... but chose it to have something to argue with people like Joseph Kosuth and Robert Smithson about. 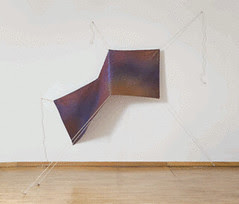 Alan Shields - I've been liking the Overstreet and the big Shields the more I think about them, especially the Shields. It's a big hanging hippie diamond-grid piece of stained and colored canvas, and looping beads... coming out at an angle into the center of the room. It isn't attached to any walls, it's all suspended. He was into Buckminster Fuller's dome-style architecture and was imagining work built for future geodesic dome houses, spaces without conventional flat walls. He has another piece in the show like a little tie-died alien pyramid. I'm very into this idea right now, of not just making the painting but imagining the space or world to which that painting belongs. 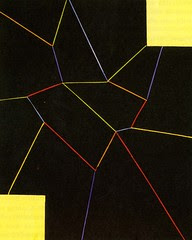 Mary Heilmann, Au Go Go , The Painting - This 1997 Heilmann painting isn't in the show of course, I'm posting it because it reminds me of both Overstreet's piece and Shield's hippy colored strings. I can see the Harmony Hammond's rugs in Heilmann's new furniture work as well.

Peter Young and David Diao - They have a conversation about their "checkered careers" in the catalogue which ends with David Diao saying "in any case, thirty-six years later, whatever we don't have, we do have 'a body of work' and, well, storage problems." 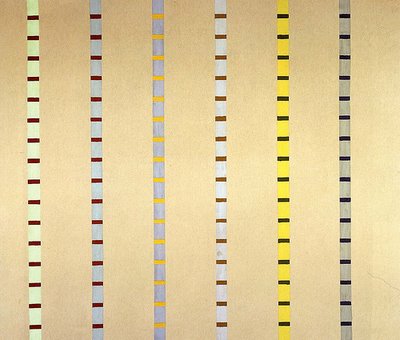 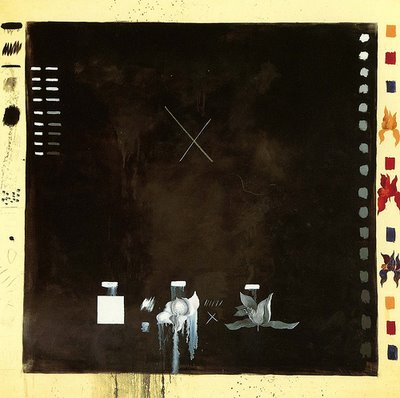 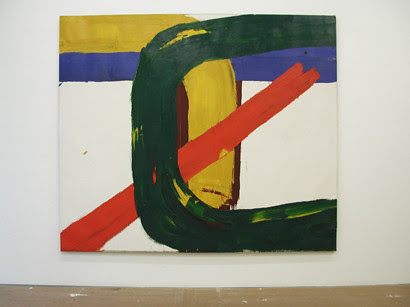 Guy Goodwin, C-Swing, 1974 - This painting is made of just five big strokes, each done on a different day. I stole this photo from David Reed's website... David Reed's studio looks big, he even has shows there.
Posted by Martin at 1:50 AM