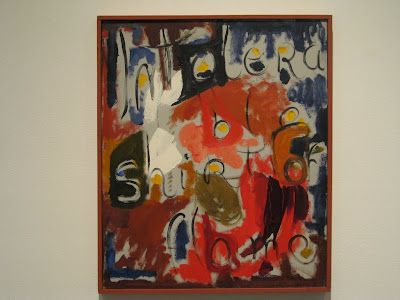 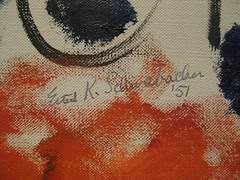 Signed and dated beneath the "e" of "Intolerable". 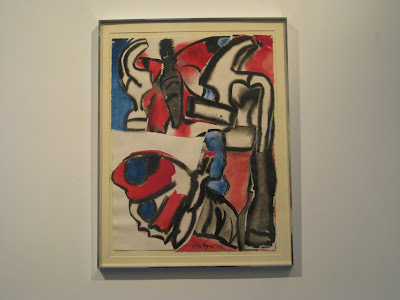 Grace Hartigan, Broken Hammer With Butterfly, watercolor and collage, 1972 - the bent hammer recalls the 1963 Lee Lozano painting.
The Hartigan is in the back, in the office area.
REGRET that I missed the big Grace Hartigan exhibit at Opalka Gallery, in Albany. We're an hour away and I had the card on the refrigerator the entire time. The Opalka show closed 10/19 and Hartigan died a month later.
RELATED:
- Gregory Coates at Opalka Gallery.
- disagreeing with Dubz on a Hartigan quote.
- Josh Smith's website.
Posted by Martin at 1:00 AM

I noticed a certain blog got hacked, something about the .htcl key or something. It redirects you to another page. I bet they know already.

oh and it comes as no suprise that signing your painting in the middle is old hat, as they say.

is another josh, they do that sort of thing. I don;t think they influence eachother though, its got to do with the name and being a latchkey kid or something.

what blog got hacked? a wordpress blog?

hey thanks for the references to other signed paintings... but when i said this schwabacher painting made me think of a josh smith i didn't mean just because of her tiny signature.

Yeah, the style is interesting - sort of load up the brush and apply until dry = scumbled edge abstraction.

Beginners do it a lot - i chalk it up to inexperience mixed with a certain frustration - "lazy" is the moralistic value judgement. "Expressionist" is the benefit of the doubt. Do you really like a scumbled edge? I don't. Not right now. Wet into wet is the only way to go, or at least tacky into tack.

I am suspect of these sorts of paintings - can we trace it directly back to German Expressionism - I'm a bit muddy on my art history as far s who begat who (I don;t really care - I'm not an art historian, I just strip-mine the past)

I can relate to the power of the 1"-6" brush stroke (wet and dry) to some paintings by Susan Rothenberg, Louise Fishman, Motherwell, Howard Hodgkin, Leipzig darlings, Nordic gods. Hell I like Jonathan Meese even though he's an undisciplined socialite.

and the noodle painters like Marden (medicine for those petrified by the grid) - all people with signature style - though I think most people have an identifiable style if they paint a while - lets say 2-3 years - and unique by 5 or 10 unless they are retarded.

ArtFagcity - looks like it got fixed. It only happened on a google search - not a direct URL, I think.

I think the hack is used to drive traffic, just for the numbers.

not to monopolize your blog (AND BE OFF TOPIC) but I was just reading about Marden - he's actually kind of growing on me:

"During the 1980s, Marden played around with broadening his signature style. He was sick of doing the same thing over and over again. Unsure of what to do, Marden stopped painting to re-examine his direction. He traveled extensively, trying to take in everything he saw. A trip to Thailand, Sri Lanka, and India changed the course of Marden’s work. In Thailand, he became more in sync with nature. He sketched seashells, taking note of their markings and patterns. An interest in Asian culture led him to calligraphy and eventually, a study of the poems of Han Shan, an eighth-century Taoist/Zen Chinese poet whose name means “Cold Mountain.”

I mean c'mon, that, my friend, is good writing.