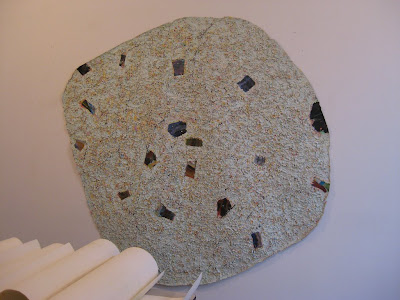 Howardena Pindell - from 1982... seperate sections are stitched together... you can see the stitching up close.
I'm forgetting the details, but I think this was made at a time when she was attempting to reclaim memories lost after being involved in an accident... the "clearings" have something to do with recording memories. 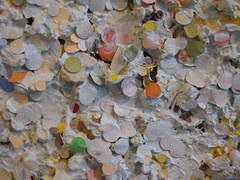 It's a check painting.... she painted all her old cancelled checks and took a hole punch to them. 1982. 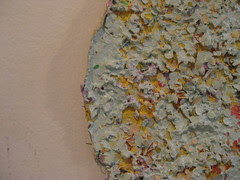 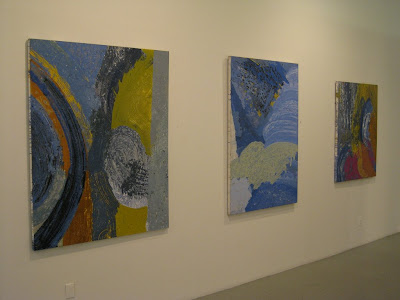 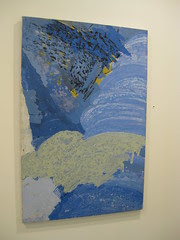 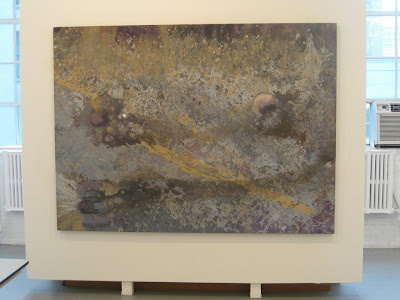 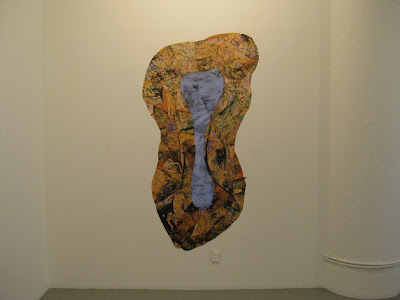 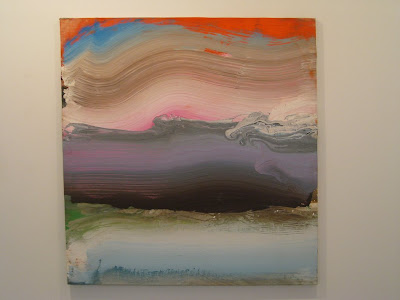 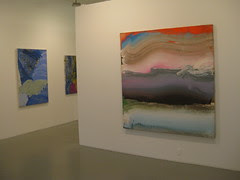 This gallery always has good stuff.
Posted by Martin at 2:30 AM

That Ed Clark is Lovecraftian; hidden horrors. Did he realize he left some parts unresolved? How could he live with that?

Ok, I'll bite: what does unresolved mean in this case? Or in any other case you want to talk about?

well anaba dislikes the way some people don't paint to the edge (I can see that in this one a bit) - that is a form of the state of unresolved - which creates tension, for some, and in others, a peaceful relaxed feeling as when the weather or water, turns warm.

But you also see the same tension between each band of color (and underpainting) so that it forms a sort of stratified pebble beach meets the water meets the sand meets the sky kind of deal.

For me, a resolved painting will mean taking my ID to the DMV and getting a replacement Drivers Licence so i can pass airport security without getting a rectal cavity search - which, as you know is a process oriented art akin to Andy Goldsworthy if he were photographing Hal9000 for a JC Penny catalog while undergoing a colonoscopy.

But in this case, unresolved means to me - a sort of abstract sense of up in the airness - a feeling that though the composition sits together formally, in an interesting way , (I think it's natural and easy to find a landscape, a beach or an ice flow, myself) it still lacks a sense that there is content above and beyond sweeping a broom across a surface - wet into wet. Like Hodgkin, like the fractal chaos generated by the laminar flow of paint under the direction of each individual bristle. Well that's just not resolved to me, though I can see how you might think so, and I'm not going to argue the point, it's too nice outside and I'm really not all that conceptual when i paint, either.

But really, a painter is someone witha really short memory, or a high tolernace for repetition, boredom, ennui, who finds peace in the repetitive actions, who needs the solace of the kind of routine art provides. You have to ask yourself, then, do you like paintings by real painters, or are you more interested in the works of fakers such as Schnabel? because that's really what it will boil down to. Most people buy art and music that corresponds to some period in their life where their identity was formed.

Imagine having the clarity of self to paint like Yves Klein? An unbroken mirror of pure trademarked blue? What balls.

DarthFan: I always read your name as Dan Farth. That's one thing.

I also would really like to know what you mean by unresolved here. Or maybe I just don't know what unresolved means.

I'm not saying I do find it resolved. Also, I think I was just as interested in Darth's question, "How could he live with that?" which seems to imply a small specific imperfection. This is different from the flow-y-ness that Zip sees as unresolved (if I'm reading correctly).

I don't mean to pull apart DF's words as if setting a trap -- just trying to understand.

Interesting about sticking with what one liked during identity formation (17-21?). I have heard that too. Bacon and Giacometti don't thrill me like they used to.

Ed Clark seems to be a mystical zen master - so the Lovecraft is not him - I'm sure he would disavow HPL's brand of Puritanical Nihilism (not to mention his racism) - but look at the flow - the colors the shapes. Do you not see the bands of Uranus? Download Google Earth and install it. Then click on the button that switches to the interstellar view. Heavenward, type in Uranus. Zoom in until you see what I see.

It's kind of amazing the way these sorts of effects work across scales, where in the cosmic horror genre the god in little things is just a mirror of the larger thing, which is waiting to devour you - like Sartre's Existentialism but with a malevolent voice.

What you see in the painting is yourself blinded to this reality - a reality that bulges with every breath from the void.

Am I scaring you yet?

There is no god. And there is no comfort in knowing that everything is connected - in fact it is horrific.

From a purely formal point of view, if I paint clouds, then scale them down and paint them vertically, I get bark, ad if I enlarge five strokes I get Uranus. Always Uranus.

Does art reveal mystic truths? No, i don't think so.

Yes, you are scaring me.

God is just a medium for people. As such it's abstract. And people, like languages and pigment, are fugitive.

LOVe the ed clark! hadn't heard of him until now, but just checked out his site and can't believe i've never seen his paintings. am i retarded? thanks martin for posting this!